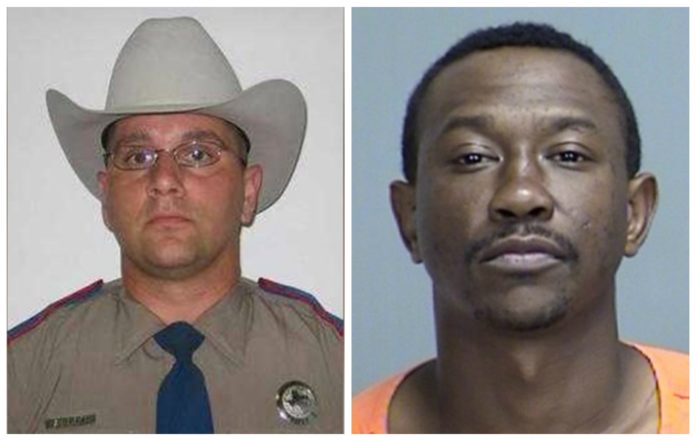 Preliminary information indicates Trooper Allen approached the vehicle and made contact with the driver. He then returned to the patrol unit, and the suspect fired multiple shots from a rifle at Trooper Allen, who died at the scene.

Allen, who was with the department since 2002, was a husband and father of three children.

The suspected gunman, identified as 32-year-old Dabrett Black of Lindale, fled the scene and was later captured in Waller County, northwest of Houston.

Shots were later reportedly fired in the area where the suspect was spotted fleeing on foot. Texas DPS troopers and multiple law enforcement agencies cornered Black before he was safely taken into custody at about 9 p.m. He was booked into the Brazos County Jail and charged with capital murder of a peace officer. As of Friday evening, Black was transported and booked into Freestone County Jail.

In July, WFAA’s sister station KYTX in Tyler reported Black was jailed in Smith County after a car chase with deputies. The chase ended when Black struck a patrol vehicle and both he and a deputy were transported to a hospital with non-life-threatening injuries. Black was charged with evading arrest, aggravated assault against a public servant, and reckless driving.

“Our DPS family is heartbroken tonight after one of Texas’ finest law enforcement officers was killed in the line of duty,” DPS Director Steven McCraw said. “Texas Highway Patrol Trooper Damon Allen was a loving husband and father of three, and we ask for your prayers for his entire family and his many friends and colleagues during the difficult days ahead. Trooper Allen’s dedication to duty, and his bravery and selfless sacrifice on this Thanksgiving Day, will never be forgotten.”

“Sad on Thanksgiving to lose one of our state troopers in the line of duty,” he wrote. “Prayers for his family. Swift justice for his killer.”