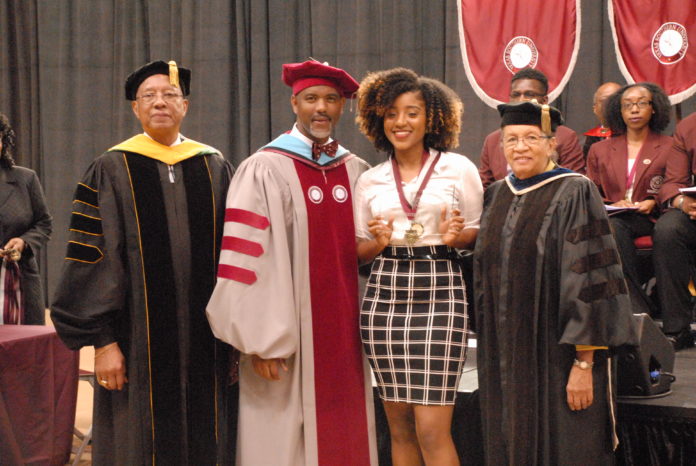 Defender: The state of Texas has placed major emphasis on graduation rates, even penalizing with the “Be on Time” legislation. What strategies are you implementing at TSU to address the low 5 percent graduation rate (according to U.S. News)?

Lane: TSU when I arrived had about a 4 percent in four-year graduation rate and in six years it was about 18 percent. There are a couple of variables that you have to put in there. A lot of times HBCU unfortunately don’t get to tell the other side of that story about that rate. The reality is 90 percent of our students are on some form of financial aid. That means that those students without funding to go to school they don’t always DROP out but they STOP out and there’s a key difference.

Our students STOP out because they don’t have the financial resources to go to school which delays their graduation each semester. Number two, in 2012 the year-round Pell Grant went away. That means that in the summer, students, particularly African-American students who are part of that 90 percent on some form of financial aid, they didn’t get the Pell Grant so what happens? Most kids at other institutions go and take a full load during the summer because that’s how they graduate faster.

Our students who rely on financial aid didn’t have those resources to be able to do it. So if you look at the data in 2012 you start to see graduation rates not only at TSU but across the country at HBCUs take a dip because again our students couldn’t afford out of pocket to pay for those summer classes to keep them on track to graduate. So it’s not that easy and it’s really unfair sometimes when you think about the demographics and socioeconomics of students here. You can’t just penalize them for not being able to finish.

The other piece (is), if the state does not fund institutions of higher learning, particularly HBCUs at an appropriate level, you’re not able to go and get the faculty members to teach the courses that students need to graduate. Many times you’ll hear students say, “I was supposed to graduate this spring and they’re not offering the class.” What happens is it delays their graduation.

What we have done in the fall is we have targeted every student who is at 90 hours, meaning they only have 90 to 120 hours, we targeted ever student to ensure that every course they’re going to need is going to be there for them to graduate so they don’t have to say “I tried to enroll but the class is closed or you’re not offering it so I have to be delayed” because we want those students to get to the finish line.

We’ve also looked at financially what it will take for those students who are between 90 and 120 to be able to put money – it’s a gap scholarship we give them now and we’re looking literally for students who are between 90 and 120 and watching their financial profiles to say, this student to get to the finish line may need $5,000. They may need $6,000, they may need $700. We’re assessing that and making sure that student is able to progress in that senior year to get to the finish line and move on.

Defender: How are you doing that assessment?

Lane: One of the biggest pieces we’ve implemented, and this is sort of what I’ve done throughout my career, is within the institution we have about five or six targets that are solely focused on a couple of things: fall-to-fall persistence, so when you start looking at how many students who started in fall 2016 made it to fall 2017? We started putting targets on that.

Fall-to-spring persistence, which is at an even better rate. This year we were at 78 percent. We’ve gone up to 85 percent in one year. So that number going up is great. Our progression rate, which means how many students go from freshman year to sophomore year. So if they take 15 hours in the fall of 2016, 15 hours in the spring of 2017, that’s 30 hours. That means when they come back in the second year they should officially be classified as sophomores.

When I showed up only 22 percent of our students were doing that and that’s not good. So the progression rate, the way we address it here now is through advising. We just hired eight new advisors. Their main priority, they’re here right now starting training. The advisors’ job is to watch students in the first year experience so their primary role – we’re bringing back the freshman seminar this fall – it’s a way we’re going to hold their hand, and that’s okay, for 16 weeks of the first semester. It’s mandatory because it’s for their own good. We’re trying to make sure they get from orientation to graduation. The advisors are the instructors of those sections. So they’re going to put them on the pathway to success.

They’re not going to come into the institution anymore and start taking some of everything. We’re going to make it very prescriptive. Let’s start off and think about what you may want to major in and during the first semester when you decide what you want to major in, in the second semester, that spring, we’ll put you on a degree plan that gets you there.

Defender: To summarize what you’re doing to address the graduation rate, what would be the 1, 2, 3, 4?

Lane: Advising, academic support, intentionally designed pathways. That’s what you’ll hear when you start finding institutions that are having some success in changing those numbers it’s because they have intentionally designed plans from orientation to graduation. It’s a very concerted effort with support built in to help students who in some cases are at risk. They need support, they need tutoring, they need supplemental instruction, counseling, advising and faculty members who are working with them all the way through.

Those will probably be the biggest changes and enhancements that we’ve added to TSU to really focus on those students to get them through the pipeline.