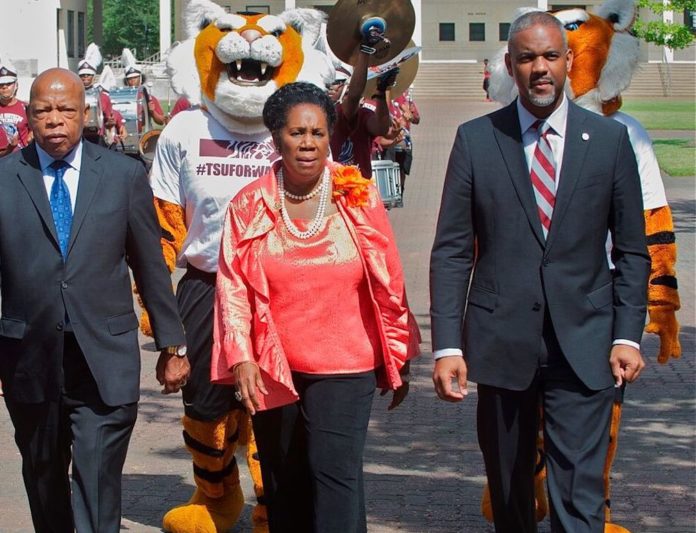 Defender: The city of Houston is growing in many sectors, and there’s a demand in the job market for talented individuals. What are some of the efforts you’re putting in place to prepare students to be competitive? Equally important is the academic credibility because some people have devalued a TSU degree.

Lane: TSU is the heart and soul of Houston, if not the country. If you flip the word around you can’t spell Houston without TSU. Someone in your family if they were here in Houston who was into higher education since 1927 had to come through Texas Southern University. So we have a proud history of creating and pushing out scholars. We know what we produce.

How do we get better? What we’re doing is here establishing advisory councils. One of our strongest advisory council is in our Jesse H. Jones School of Business. In the advisory council that we have there has influential leaders working in Houston corporations whether it be in oil and gas or banking, any business-related area. And these individuals who have influence are giving us sort of a cheat sheet on what our students need to know and learn before they get into their internships and eventually the corporations that they work in which is what we need.

You hear about the Aggie network and some of these other places and it’s because they have strong advisory boards. That’s something that we’re enhancing here. Where I come from we have very strong advisory boards and that means in conjunction with our deans of every school they have to identify influential leaders inside of these corporate organizations – Shell, Amegy, H-E-B, NRG.

Whatever corporations are looking for our graduates, they’re bringing these folks into our institution and we’re getting feedback on how well our students are doing at those institutions. What is it that we can add to our curriculum to help those students be more competitive, what kinds of internships can we get our students after the freshman year.

We know that if you get an internship in your junior or senior year it’s too late. There are other students who are already there so we are at a disadvantage unless we get there early. Our students need paid internships and so this pipeline to these corporations is critical.

The last thing I’ll add is the state has come up with a plan, the Higher Education Coordinating Board has a new plan, 60 by 30 Texas. What they’re saying is by 2030, 60 percent of Texans will need a degree or certificate. You and I both know what this state is going to look like in 2030. We already know what HISD looks like, they’re over 60 percent minority. Dallas is the same way. They’re probably closer to 75 percent minority. So we know TSU is going to produce more African-American and Hispanic students than any other university in this state.

We already turn out more African-American and Hispanic graduates than A&M and UT combined. We just had 1,139 graduates cross the stage this May. So we know we’re the institution for corporations that want to be diverse and we’re in a diverse city with our great mayor, Sylvester Turner, and we know we’re going to be the future.

Not only are we the heart and soul of this community and Houston, but we also know that corporations that want more diverse workforces will look to us to produce those students to work in those corporations. We’ll be ready to do that.