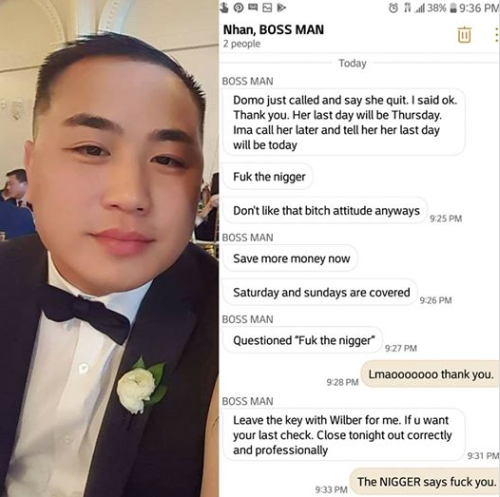 The former manager of a Vietnamese eatery in Sugar Land, Texas, is speaking out against the restaurant’s co-owner for calling her the n-word and a “bitch” in an angry text.

Domo Schneckenburg, who quit her job at the Pho Shack last week, says her boss has since resigned following outrage over the incident.

The popular restaurant found itself mired in controversy after Schneckenburg, 26, posted screenshots from a group text message thread between her and restaurant owner Danh Le in which he made the racist remarks. Beforehand, the 26-year old had called to give her boss notice that she was quitting her job of 2 1/2 years as a manager of two Pho Shack locations, in Katy and Sugar Land.

The call went fine, she said, but it turned out Le didn’t take the news very well.

“Domo just called and say she quit,” Le texted the restaurant’s other owner. “I said okay. Thank you. Her last day will be Thursday. Ima call her later and tell her her last day will be today. F*** the [N-word]. Don’t like that b**** attitude anyways.”

“Lmaooooooo,” wrote Schneckenburg, who was also included in the thread.

Rather than apologizing, Le wrote back: “Leave the key with Wilber for me. If u want your last check. Close tonight out correctly and professionally.”

The following morning, the former manager took to Facebook to detail what happened and described the incident as a “rude awakening.”

“I won’t lie and say I wasn’t surprised by [Le]’s reaction because I was,” Schneckenburg wrote. “It was a rude awakening that the stereotypes between black and Asians are still true, New generation or not. Regardless of how long you’ve known them, how hard you have worked, how trustworthy you have been, whether or not the family knows you, etc. You’re still a [N-word] in their eyes.”

Schneckenburg said she should’ve known her bosses’ true feelings, seeing as they would casually use the slur in her presence at work until she told them she was uncomfortable with it. She told Yahoo Newsthat was part of the reason she decided to resign.

“When I got the text, I was extremely hurt and angry and I flipped a table over,” she said. “I also called a staff meeting because I wanted everyone to know what the owner thinks of me.”

The young woman’s post garnered viral buzz on social media, prompting angry locals to call the restaurant and complain, while others bombarded the business’ Yelp! page with negative reviews. Local eatery and catering company Daddy Duncan’s BBQ also decided to end its partnership with the Pho Shack, writing on Facebook, “We do not condone discrimination in any shape or form, [so] we have stopped all business” with the restaurant.

Yelp temporarily disabled comments on The Pho Shack’s page to block inauthentic users, Yahoo News reported. However, that didn’t stop restaurant regulars, and even a few of Schneckenburgs’ former employees, from posting about Le’s bad behavior.

“What y’all don’t get is they’ve been this unappreciative of Domo Schneckenburg,” Andre Harrell commented under Schneckenburg’s Facebook post. “They over worked the s— out of her. She was the go-to for everything and anything they needed. Store runs mid shift cause the owners were missing this or that. Late paychecks. They’d cheat her out of paychecks to the point where she had to start calculating her hours herself.”

“Domo cared about that restaurant and the employees significantly more than Danh,” Harrell added. “As a former employee myself, I am not surprised. At all. I could really assassinate [Le’s] character by quoting what the other two store owners but he’s dug his own grave.”

Le, who called the cops on Schneckenburg for flipping the table after he insulted her via text, has since apologized for his comments and recently shuttered the restaurant’s Facebook pages. Before that, both locations posted apologies — including one written by Le himself, according to the Daily Dot.

“I grew up in an environment that allowed ignorance to prosper, allowing the N-word to be used casually amongst friends, and it remained a part of my vocabulary until now, but that stops here,” he wrote. “The conversation that took place was fueled by rage and mixed emotions, and as a result that word took a turn for the worst. My temper has always been my downfall.”

The owner said he chose to “resign” — it is unclear how one resigns from ownership — because “I no longer have the right to represent this company.”

In an interview with Yahoo News, Le claimed Schneckenburg was disrespectful when she resigned but said he was still wrong to use the n-word.

“I have worked with Domo for two and a half years — if I were racist, she would have left a long time ago,” he argued. Le said he has since apologized to Schneckenburg, as well as the rest of the Pho Shack staff.

“I am very, very sorry and I will never do this again,” he added.