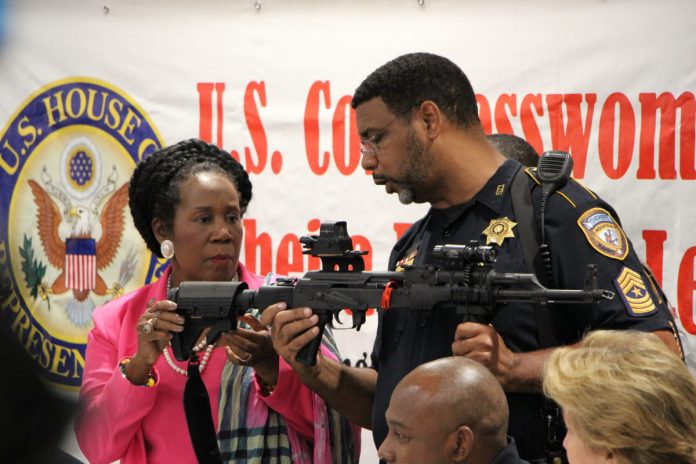 Elected officials, like Gov. Greg Abbott, have vowed to do something.

“The time for talking is over,” Abbott said after the El Paso attack on Aug. 3. “The time for action began today.”

Meanwhile, committees in the Texas House and Senate will meet this month to discuss solutions. Items on the agenda include the impact of cultural issues like video games, how law enforcement can work with social media companies, and closing background check loopholes.

But many gun control advocates say it’s not enough. They want to see immediate changes in the state’s gun laws.

Democratic lawmakers wrote a letter to the governor calling for a special legislative session now, rather than waiting for the next regular session in 2021.

“At some point we have to say that waiting two years is too long of a time to interrupt the culture that is really growing, whether it’s domestic terrorism, racism, white supremacy and it’s manifesting itself in gun violence,” state Rep. Mary Gonzalez, D-El Paso, said.

But the governor has shrugged off calls for a special session, saying it would just lead to partisan disagreement over gun control.

Meanwhile, Democrats and activists are taking the case for what they think needs to be done to the public.

Last week, U.S. Rep. Sheila Jackson Lee, D-Houston, hosted a gun violence prevention summit with members of the law enforcement, medical and legal communities. The point was to get the perspectives of experts of different fields who are dealing with gun violence and to then use that testimony to get gun control legislation passed in Congress.

Also in Houston last week, the political group Latino Victory Project hosted a roundtable discussion together with the gun control group Giffords. It focused on gun safety policies and how to address hateful rhetoric against Latinos, who were targeted in El Paso and also made up the majority of victims in the Midland-Odessa shooting.

Harris County Judge Lina Hidalgo acknowledged there are other parts to the solution besides gun control, like better law enforcement or conflict solution training.

“So it’s all connected,” she said. “But the reality is that it’s while we have to look at all those things, it’s necessary for us to look at the gun safety proposals.”

We reached out to a number of Republican leaders, including Gov. Abbott, Lt. Gov. Dan Patrick, House Speaker Dennis Bonnen, as well as all Republican members of the Senate Select Committee on Mass Violence Prevention and Community Safetyand members of the corresponding House committee.

None were available for interviews.

Sen. Jane Nelson, R-Flower Mound, who chairs the Senate committee, responded with a statement, saying, “We are all horrified by continued acts of violence, and I applaud leadership for appointing this committee to examine ways to prevent these senseless tragedies.”

Sen. Donna Campbell, R- New Braunfels, released a statement saying, in part, “we must strive to protect young people from dangerous influences that are causing them to tolerate violence and de-value human life. We must improve access to mental healthcare and we must find ways to restrict access to firearms by individuals who would not pass federal background checks.”

She added this needs to be done without violating the “God-given right” to self-defense.

Brandon Rottinghaus, a political scientist at the University of Houston, said Democrats and Republicans are actually coming closer to acting on gun violence.

“I think there’s more common ground to be found now than there was before,” he told News 88.7.

Rottinghaus said the pressure is on Republicans to make concessions on gun policies, as Texans want changes.

“It used to be that more people didn’t want to change the regulations,” he said. “But now there’s a growing consensus that more needs to be done.”

Even Lt. Gov. Patrick seems to see it. The Republican boasts an A-plus rating from the National Rifle Association. But last week, he called for background checks for stranger-to-stranger gun sales.

That’s how police think the Midland-Odessa shooter bought his gun — because he couldn’t pass a background check at a gun store.

Patrick’s call is unusual, Rottinghaus said, because the difficulty for many Republicans is that they don’t want to vote for something that could be seen as restricting Second Amendment rights. Not surprisingly, the NRA pushed back on Patrick’s proposal.

Meanwhile, change is happening in the private sector. Walmart said it will no longer sell certain ammunition or allow open carry at its stores. The El Paso mass shooting happened at a Walmart.

Other retailers have also responded, and Rottinghaus said that could change the political calculus.

“If it’s the case that this becomes a more strong political issue, then you might see other businesses following along and that could give some political cover to Republicans to be able to act,” he said.

The Legislature didn’t pass a single gun limit in this year’s session. In fact, several new laws loosen regulations – allowing firearms at churches and in cars on school parking lots, for example.

There continues to be a clear disconnect between Democrats and Republicans on what makes the public safer, but Rottinghaus said just the fact that Texas Republicans are now talking about gun safety is a win for Democrats and those wanting stricter gun laws.