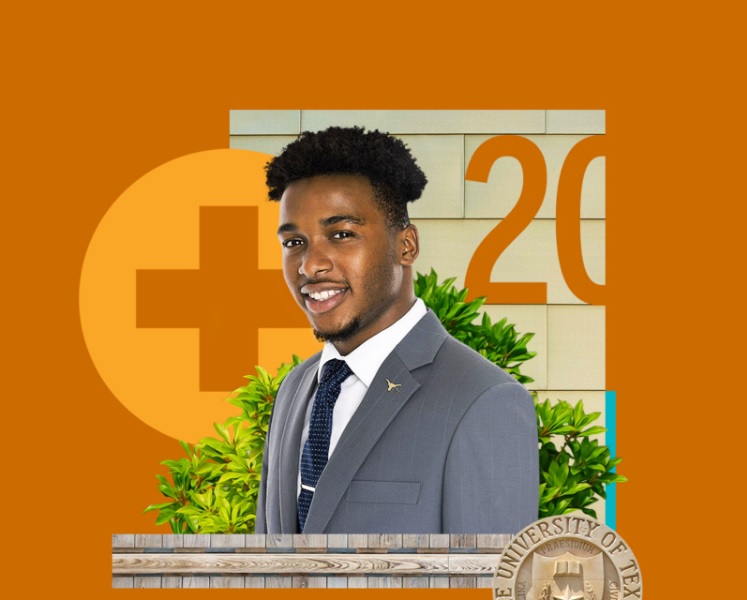 Sponsored content by The University of Texas at Austin

Biochemistry senior Brandon Okeke explains why he is quick to share his phone number, his med school plans, and his love of learning.

Brandon Okeke spotted another student on a bus on a late night in central Austin during his freshman year.

“Hey, your name is Abraham, right?” he recalls saying. Okeke had heard of the upperclassman earlier that year. He was from the same part of Houston as Okeke, he was Nigerian as Okeke is, and he had just accomplished one of Okeke’s goals of being accepted into medical school.

Okeke took out his phone as Abraham gave him his contact information. “He was like, ‘Yeah, don’t ever be afraid to reach out and ask me questions,’” Okeke says. “And to this day, it’s been that way.”

Brandon Okeke is a biochemistry senior graduating this month from The University of Texas at Austin. With some uncertainty due to the COVID-19 pandemic, Okeke will soon attend medical school at the University of Texas Medical Branch at Galveston. A 2020 recipient of the Student Legacy Award from UT’s Division of Diversity and Community Engagement and the Texas Exes’ Edward S. Guleke Student Excellence Awards, he is one of our outstanding graduates from the 2020 class.

As he did that night approaching Abraham, Okeke has always asked questions. What you’ll find in him is a seemingly insatiable love of learning. He has minors in educational psychology and African and African diaspora studies.

“At this university, sometimes we are just one person,” he says, “but it’s the fact that we learn from each other that’s really going to be the difference in the world.”

As a first-grader, Okeke had a big presence in class. He would burn through the work and would answer every question in class to the point that his teachers felt it should be addressed. His parents were called in to discuss whether the boy should skip a grade. His mother rejected the idea, as Okeke was already small for his age, having been born prematurely.

“I stayed in the grade,” he says. “They gave me a binder and said, ‘Whenever you finish the work, go through this binder and do more work.’”

“School was my safe place. I could just go and learn,” he says.

“Growing up, we were kind of poor. So being at home, I wouldn’t eat that well all the time. And my parents were always working,” he says. “I would dread the weekend because at least at school, I knew I was guaranteed to get two meals. I liked school because I knew I had everything I was going to need.”