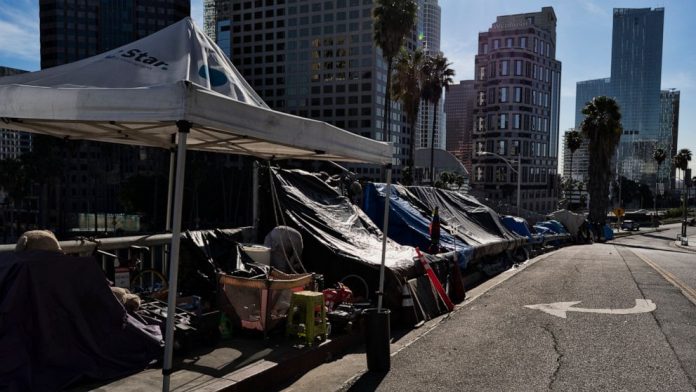 African Americans, despite making up just 13% of the U.S. population, account for a staggeringly disproportionate chunk of the nation’s homeless population, according to a government report.

In 2019, an estimated 568,000 Americans experienced homelessness, with African Americans making up about 40% of that total, according to the annual Homeless Assessment Report to Congress. The total figure in 2018 was about 553,000.

The disparity was starker when looking at the number of homeless people with children: African Americans accounted for about 52% of that population, with whites accounting for about 35%, the report said.

In contrast, 48% of all people experiencing homelessness were white compared with 77% of the total U.S. population, while people who identify as Hispanic or Latino represented about 22% of the homeless population, but only 18% of the overall population.

“African Americans have remained considerably overrepresented among the homeless population compared to the U.S. population,” the report said. “This report demonstrates continued progress toward ending homelessness, but also a need to re-calibrate policy to make future efforts more effective and aligned with the unique needs of different communities.”

The U.S. Housing and Urban Development report, which came out earlier this month, was based on “Point-In-Time Estimates of Homelessness” taken on a single night in January 2019.

Advocates point to the compounding effects of long-standing discrimination and inequalities within the country’s housing, criminal justice and health care systems to explain why African Americans make up such a large portion of the homeless population compared with their overall proportion of the general population.

“This year’s report is as an urgent call to action to federal, state, and local leaders,” Nan Roman, president and CEO of the National Alliance to End Homelessness, said in a statement in response to the report’s findings. “Now is not the time to abandon the practices that drove those results. Now is the time to get serious about funding them to scale.”

The organization’s research found that poverty was a strong predictor of homelessness, and noted that African American households are much more likely to experience poverty than their white counterparts. About 21% of African Americans live in poverty — nearly 2.5 times the rate of whites, the organization said.