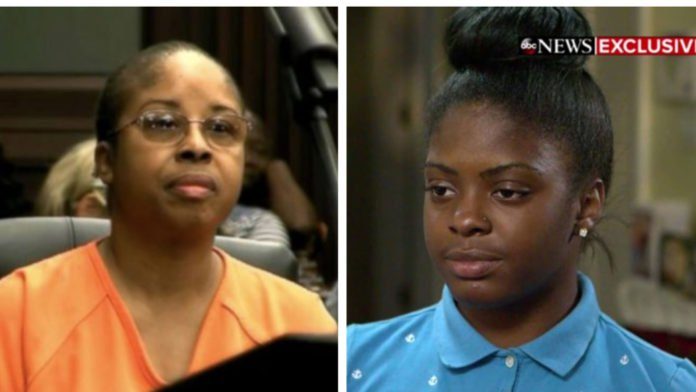 For Kamiyah Mobley, a mother’s love has no conditions and even after finding out she was kidnapped as an infant, Mobley said she still has love for the woman who stole her, reports Daily Mail.

Gloria Williams was sentenced to 18 years in prison on Friday for kidnapping baby Mobley from a hospital nearly two decades ago and raising the child as her own child.

In an ABC News interview, 19-year-old Mobley spoke lovingly about Williams and says she still calls her “mom” on jailhouse calls.

“She was very open to all my friends I brought through that door,’ Mobley said. ‘She was one of those mothers, she was like open to sleepovers, open to company. Always smiling, always upbeat, up-tempo about everything. Very hard working, very hard working. She was actually getting her master’s [degree] before she was incarcerated.’

And Williams is still acting in a “mom” capacity.

“Oh yeah, she calls and still gets on me. Yes, she does,’ Mobley added.

Mobley said not much has changed since Williams’ learned her fate in a Jacksonville courtroom nearly four months after pleading guilty to taking Kamiyah Mobley on July 10, 1998.

“There are no winners and losers in this case. It’s a very sad case and many people have suffered, including Ms. Williams,” Fourth Judicial Circuit Judge Marianne Aho said during the sentencing, WXJT-TV reported.

In addition to the kidnapping sentence, Williams, 52, will serve five years concurrently for custodial interference. The sentencing is another episode in the saga where Williams posing as a nurse entered the hospital room of Mobley’s biological mother and secretly left with the newborn girl.

Mobley says she still continues to visit Williams in jail and speak to her.

“I’ve gone to Florida several times … and I call them. We talk almost every day,” she said.

Mobley admits she is relieved that the trial is over.

“I actually got closure now,’ she said. “Everything is done. No more court. No more back and forth.”