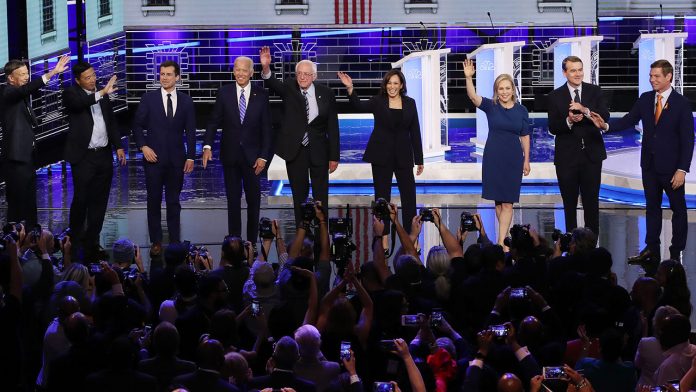 Democratic presidential candidates reiterated their call for gun control Wednesday and urged Americans to keep up the fight for change, sidestepping the issue of impeachment in Washington and whether it will divert lawmakers.

At a gun policy forum in Nevada, Cory Booker said the National Rifle Association and the corporate gun lobby are not the only forces stopping progress on gun control.

“Change never comes from Washington. It comes to Washington by Americans that demand it,” the New Jersey senator said. He added later that “Every one of us in America, right now, by doing nothing, we are implicated in this. …. We all have to take responsibility.”

The forum _ located about 2 miles from the Las Vegas Strip, the site of the deadliest mass shooting in modern American history _ was held amid an effort to keep gun violence front and center of the debate and gave 2020 presidential candidates a chance to showcase their plans to combat the epidemic. Negotiations between President Donald Trump’s administration and lawmakers have halted over background checks legislation passed by the Democratic-controlled House, an effort that faced long odds even before the impeachment inquiry began.

“This president has gotten nothing done about much of anything,” California Sen. Kamala Harris said Wednesday, adding that Trump will use impeachment as an excuse to avoid action.

Former Vice President Joe Biden made a similar prognosis, saying, “Nothing is going to change until we get this guy out of office.”

They were among nine White House hopefuls to speak at the forum Wednesday, almost two years to the day after a man rained gunfire from the window of a high-rise hotel onto a country music festival below, killing 58 people. The forum was hosted by MSNBC, March for Our Lives and Giffords, the advocacy organization set up by former Arizona congresswoman Gabby Giffords, who was shot and gravely wounded during a constituent meeting in 2011 in Tucson.

Giffords opened the event with brief remarks calling for Democrats, Republicans and independents to come together and fight for change.

Vermont Sen. Bernie Sanders was expected to attend, but he ended up undergoing a heart procedure for a blocked artery. His campaign said he was canceling appearances “until further notice.”

O’Rourke recast his campaign around gun control after the August shooting in his hometown of El Paso, Texas, where a gunman targeting Hispanics killed 22 people. O’Rourke vowed to ban assault weapons, saying at a debate in Houston in September, “Hell, yes, we’re gonna take your AR-15, your AK-47, and we’re not going to allow it to be used against your fellow Americans anymore.” That’s a shift from his position during his 2018 U.S. Senate campaign, when he did not support mandatory buybacks.

O’Rourke criticized Buttigieg for saying that a mandatory government gun buyback program has “mixed results” and likening it to a “shiny object” that makes it harder to pass other gun control policies.

“I was really offended by those comments, and I think he represents a kind of politics that is focused on poll testing and focus group driving and triangulating and listening to consultants before you arrive at a position,” O’Rourke told reporters later.

O’Rourke himself was criticized earlier in the day by Booker, who said O’Rourke only supported a gun licensing program after the shooting in his hometown.

While Buttigieg didn’t endorse mandatory gun buybacks, he did speak in support of banning assault weapons, saying it’s not true that the Second Amendment bars the government from banning certain weapons.

“In America, it is already the case that, anybody, as far as I know, can have a slingshot. And nobody can have a nuclear weapon,” he said. “If you think about it, that means we have already decided, as a society, consistent with our Constitution, within the boundaries of the Second Amendment, that there’s a line.”

Booker and Harris also said they support some type of mandatory buyback program. Castro said he’s open to hearing arguments for a mandatory gun buyback, “but I think there are 15 things _ different things _ that we can do.”

Most candidates have focused on expanding background checks and banning the future manufacture and sale of certain high-powered weapons.

Warren echoed a key theme of her campaign when she said inaction on gun policy is a symptom of corruption in Washington.

Biden on Wednesday released a detailed gun policy plan emphasizing his role as a leading senator in adopting a background check law in 1993 and a ban on certain semi-automatic weapons as part of a sweeping 1994 crime law. That ban expired after 10 years.

Besides renewing that ban and including high-capacity magazines, Biden wants a ban on the online sales of guns and ammunition, along with a voluntary buyback program for military-style guns. He proposes a $900 million, eight-year grant program for evidence-based intervention programs in 40 cities with high homicide rates. The idea reflects a point Biden and some other candidates make often when campaigning: Mass shootings account for only a small fraction of U.S. gun deaths.

“Let me just say on gun violence prevention: We are not going away until we get legislation signed into law that protects our children,” she said.