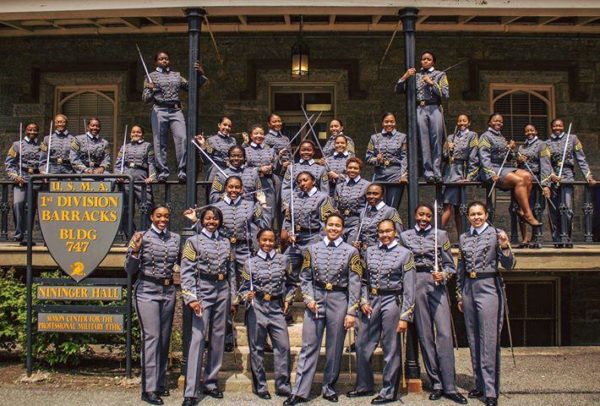 It’s been two years since Simone Askew became the first Black woman to serve as First Captain of the corp of cadets at the U.S. Military Academy at West Point. Now, the school is set to make history yet again by graduating its largest class of African-American women.

A groundbreaking 32 Black women cadets are set to walk across the stage at the esteemed academy in New York state this spring, blog Because of Them We Can reported. To commemorate the historic occasion, the soon-to-be grads gathered for a traditional Old Corps photo shoot on campus.

The young women beamed in their sharp uniforms, showcasing their swords and plenty of big, gold buttons.

“My hope when young Black girls see these photos is that they understand that regardless of what life presents you, you have the ability and fortitude to be a force to be reckoned with,” Cadet Tiffany Welch-Baker told the outlet.

Welch-Baker admitted she wasn’t sure she’d made the right decision when she first set foot on West Point’s campus four years ago. In that time, however, the cadet said she found more than friends — she found a family.

The cadet’s proud mother sent Because of Them We Can photos of the new graduating class, exclaiming that she simply “couldn’t let all this Black Girl Magic unnoticed.”

“Congratulations, ladies! Job well done. Many blessings to you all!” another chimed in.“Rock on ladies! All the best to you all,” one man agreed.

“A great photo and a sign of our future military leadership,” another user wrote, before adding: “America has come a long way (and still has a way to go).”