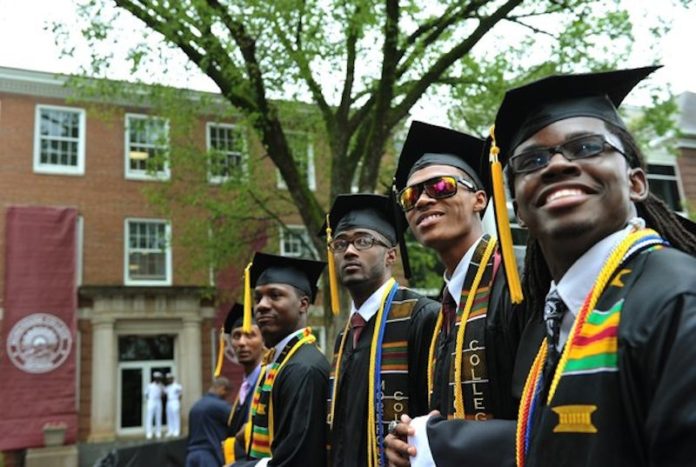 The argument that we no longer need historically black colleges and universities is beyond tired and played out.

For decades, those with little-to-no knowledge about these institutions have received misinformation thanks to stereotypes. Most recently, for instance, Wendy Williams got schooled by Roland Martin (and apologized) for calling HBCUs offensive to white students.

It’s been said that colleges like Hampton University, Spelman College and North Carolina A&T promote racism (no), provide an inadequate education (still no), aren’t diverse (nope) and other fallacies for years.

The only way to correct misinformation is with receipts. With the help of Howard University professor and historian Edna Medford, we’re here to clear up some of the most egregious misconceptions. Grab a pen and take notes because class is in session.

To call the existence of HBCUs racist is to ignore the foundation on which they were built. Black people have long faced barriers to acquiring an education. Medford explained that HBCUs were therefore built to combat racist laws that disenfranchised black students.

“I think what we need to remember is that HBCUs were there for people of color when we were not wanted in predominantly white institutions. When we were denied access to those institutions, HBCUs were here for use,” Medford told The Huffington Post. “So education means so much to us and higher education becomes significant because we understand that we’re not going to be able to enter the mainstream society unless we can compete on that level.”

Medford also pointed out that just because these schools are predominantly black doesn’t mean they promote segregation. These institutions have never in their nearly 180 years of existence said that only black people are allowed to attend black colleges, she said.

In fact, HBCU students have worked tirelessly to end segregation and racism. For instance, Thurgood Marshall studied under Charles Hamilton Houston at Howard School of Law. He later became a Supreme Court Justice and faved the way for the landmark ruling of “separate but equal” in the 1954 case, Brown v. Board of Education.

The abundance of black excellence at HBCUs isn’t by coincidence. For the first time in many of these students’ lives, they see a reflection of themselves in textbooks that goes beyond just civil rights. To mistake a curriculum that focuses on black history and culture as inadequate is a notion rooted in white supremacy.

“It doesn’t mean that we ignore the larger education, it’s just that we make a point of incorporating ourselves as well,” Medford said. “So we’re no longer at the periphery. And I think that is so important to training young minds because if we don’t know who we are, how are we going to go out into the world and really make a difference. I think HBCUs do that better than any other place.”

HBCU graduates are also making major nationwide and global contributions. These schools are producing more black people who earn their doctorate degrees in STEM than non-HBCUs, according to the American Institutes for Research. HBCU graduates also dominate other fields like art and entertainment (Phylicia Rashad), politics (Rev. Jesse Jackson) and more (Oprah Winfrey).

Medford, who graduated from Hampton University, said that the mentoring and nurturing students receive at these schools is a factor that sets HBCUs apart from predominantly white institutions (PWIs). Aside from preparing them to thrive in their career, students at black colleges learn how to navigate racial microaggressions they’ll face and empower them to make a difference.

“I think that what HBCUs do is they don’t just attempt to educate the student for the workplace or for the career, they also have a mission that ties into the idea that these students are responsible for giving back,” Medford told HuffPost. “Now, perhaps you can get that at other institutions as well but… there’s a special sense of mission here.”

In recent years, HBCUs have seen an increase of non-black students. Students come from all over the world to attend some of these schools.

Howard University in Washington, D.C. is among the most diverse black colleges, with students from nearly each state and more than 70 countries around the world. Some international students at schools like Howard come from the diaspora while others are from countries like Russia, Nepal, China, Saudi Arabia and other non-African countries.

While most HBCUs remain predominantly black, some schools ― such as Lincoln University of Missouri, West Virginia State University and Bluefield State College ― have a majority white population.

One of the most asked questions about HBCUs (right under if Hillman College is a real university) is if they are still relevant.

The answer has always been yes.

The more than 100 HBCUs are vital and still serving their purpose in creating a necessary and safe space in which black intellectuals can talk freely about the issues they care about.

Medford said that HBCUs help teach black people who we are, especially in a world that constantly tells us otherwise.

Medford said when she attended PWIs for graduate school, she was often questioned about whether or not she was “good enough.” But during her time at Hampton, that was never the question. She said she was expected to do well and if she didn’t, her professors would make sure she got the tools she needed. Medford said this is a universal theme among HBCUs.

“If you don’t know who you are and you cannot appreciate who you are and what your people have accomplished then you’re not going to be able to move forward,” Medford said. “It’s unbelievable that that happened [to me] and I know that was many years ago, still that attitude is there. So that’s why HBCUs are still, not just relevant, but absolutely necessary.”