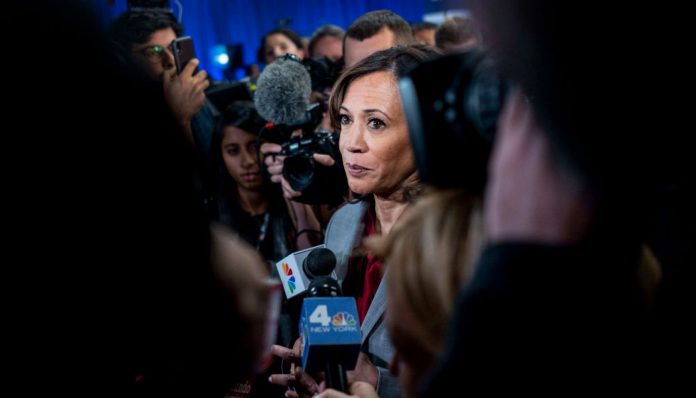 It’s been even less clear in which direction Democrats were headed after Kamala Harris’ unexpected suspension of her campaign last week. While the low-polling senator from California never seemed to pose a true threat to her front-running fellow candidates, her departure brought attention to the paling field of mostly white men that now has one less person of color.

Her supporters were no doubt disappointed. But Harris also had her fair share of critics, too — especially when it came to the collision of poor and Black people and the senator’s prosecutorial past, the latter of which she repeatedly touted on the campaign trail. Without the proper polling and funding, her campaign was forced to call it quits.

But that didn’t mean she would all of a sudden disappear. In fact, Harris made sure to say when she announced the suspension of her campaign and said she was “still very much in this fight.” What exactly that meant remains to be seen. But with Harris’ current senate term ending in 2023, her new main priority is stopping President Donald Trump from getting re-elected, she said.

Here are five things we will or could see from Harris after she suspended her presidential campaign.

Senate Impeachment trial: This is all but a given, assuming the House impeaches Trump. Harris already tweeted she was looking forward to it, engaging Trump’s taunting tweet to her after she announced the suspension of her campaign. It will be interesting to see how exactly this plays out now that Harris, a member of the House Judiciary Committee, is free from campaign obligations and returns full-time to the Senate. Who knows? Given her prosecutorial past, Harris could ultimately prove to be the difference that secures a conviction. If recent elections have taught America one thing, it’s never to underestimate the political power of a Black woman.

VP candidate? For all of Harris’ critics, including those who attacked her on the debate stage, no one can deny what a great addition she’d be to a ticket as a vice-presidential candidate. The overall Democratic narrative of 2020 has been one of diversity, with a rising chorus of voices insisting that the nominees can’t be two white men. Instead, there should be some semblance of diversity. While Stacey Abrams has been openly courted by frontrunner Joe Biden, the presumptive nominee, we can’t count out Harris’ prospects of being considered, too.

Attorney general nomination? – Should she not be tapped as the nominee’s running mate, she can always rely on her legal laurels and real-life career experience that makes her the most likely choice to be the next attorney general should Democrats win in 2020. It would be a no-brainer of a nomination as well as a historic one as Harris would become the third Black person ever confirmed to the position and the second Black woman, succeeding Eric Holder and Loretta Lynch.

Endorsement? She’s out of the race, but her dedicated supporters are up for grabs. Who will she endorse? It’s a question that her now-former rival candidates are surely coveting with back door politics probably already at play as each campaign still standing jockeys for position for her support. Harris had just recently won the support of an influential Black women’s group that may be looking to get behind another candidate. Whomever Harris endorses can expect Black women to follow, underscoring how much weight Harris’ endorsement carries.

Get Ready for 2024? – Yes, it’s really early, but the way things are looking, Democrats are poised to lose to Trump once again. There is still time for that increasing probability to lessen, but that means it would take decisive and deliberate leadership from the Democratic Party, something that’s proven especially elusive in recent years. Maybe Harris will take everything she’s learned from this past candidacy and come back as a new and improved presidential candidate four years from now.

The bottom line is that aside from Harris’ involvement in impeachment proceedings, her immediate future is very much unclear at this point. But priorities are called that for a reason. Let’s all sit back and watch Senator Harris go to work during Trump’s impeachment trial.