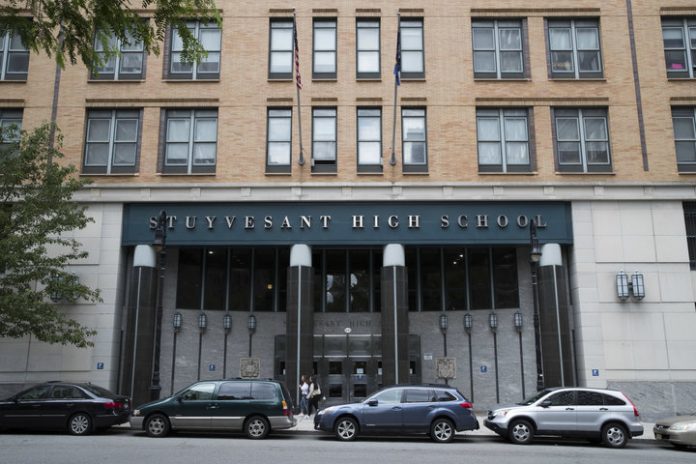 Just 4 percent ― or 190 students ― of the 4,800 students invited to attend the city’s eight most selective schools this fall are black. That amount is down from 207 black students admitted last year out of more than 5,000 offers, the city said on Monday.

All eight of the specialized schools use a single test score ― from the Specialized High School Admissions Test, or SHSAT ― to determine a student’s eligibility. New York City Mayor Bill de Blasio (D) has advocated for abolishing the test, which he’s called a “roadblock to justice.”

The data released by the city does not include Fiorello H. LaGuardia High School of Music & Art and Performing Arts, another specialized high school that requires an audition and not the SHSAT to apply.

In terms of white students, Stuyvesant sent invitations to 194 students this year, up from 151 last year. Among all eight schools, the acceptance rate increased from 1,344 to 1,368.

The number of Asian-American students, who make up more than half of the specialized schools, slightly decreased at Stuyvesant from 613 to 587 as well as across the board from 2,620 to 2,450.

Rep. Alexandria Ocasio-Cortez (D-N.Y.) was among those criticizing the acceptance rates while noting that more than half of the city’s public school students are black or Latino.

“To only have 7 Black students accepted into Stuyvesant (a *public* high school) tells us that this is a system failure,” she tweeted on Tuesday. “Education inequity is a major factor in the racial wealth gap. This is what injustice looks like.”

The city had hoped to increase the schools’ diversity to better reflect its demographics. As Ocasio-Cortez pointed out, black and Hispanic students make up nearly 70 percent of the city’s public school system as a whole, according to The New York Times.

The city last year announced plans to increase openings for those with disadvantaged backgrounds by extending offers to students whose test scores are just below the acceptance cutoff and who agree to participate in a summer program called Discovery. It then decreased this year’s total number of offers so that approximately 500 openings could be offered to Discovery participants.

The de Blasio administration had estimated that over two years, 16 percent of the admission letters would go to black and Latino students, compared to 9 percent at the time of last year’s announcement.

A group of Asian-American education advocates filed a lawsuit against de Blasio and Carranza late last year, arguing that the changes to the admissions policy would discriminate against Asian-American students.

The city has said that by 2020 it hopes to reserve 20 percent of its seats at each specialized high school for Discovery program participants.

Applicable students will be notified later this spring if they are invited to attend the Discovery program.