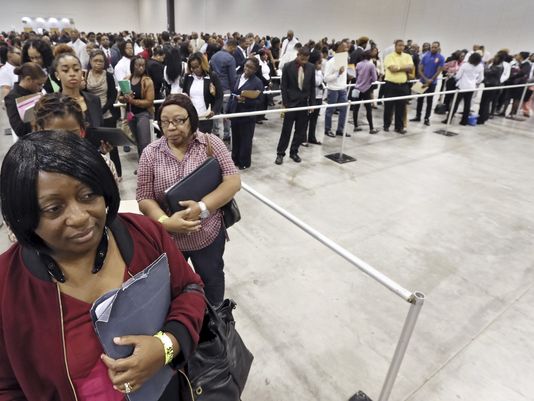 U.S. employers shrugged off last month’s partial shutdown of the government and engaged in a burst of hiring in January, adding 304,000 jobs, the most in nearly a year.

The healthy gain the government reported Friday illustrated the job market’s resilience nearly a decade into the economic expansion. The U.S. has now added jobs for 100 straight months, the longest such period on record.

The unemployment rate did rise in January to 4 percent from 3.9 percent, the Labor Department said, but mostly for a technical reason: The number of people counted as temporarily unemployed jumped 175,000, with most of that increase consisting of federal workers and contractors affected by the shutdown.

The government on Friday also sharply revised down its estimates of job growth in November and December. Still, hiring has accelerated since last summer, a development that has surprised economists because hiring typically slows when unemployment is so low.

“The overwhelming conclusion from today’s numbers is that the U.S. labor market remained incredibly strong at the start of 2019,” said Leslie Preston, senior economist at TD Economics.

Diane Swonk, chief economist at Grant Thornton, said that many federal workers and contractors likely went out and found part-time work during the 35-day shutdown. The ability of many of them to do so is itself a sign of the job market’s strength, Swonk said.

Last month’s healthy job gain will assuage some concerns that had arisen about the U.S. economy. Global growth is weakening, the Trump administration is engaged in a trade war with China and higher mortgage rates have slowed home sales. Those factors have led many economists to forecast slower growth this year compared with 2018.

Most sectors of the economy reported solid hiring gains in January. Education and health care added 55,000 jobs, retailers nearly 21,000 and professional and business services, which includes such higher-paying positions as engineers and architects, 30,000.

The ongoing demand for workers is leading some businesses to offer higher pay to attract and keep staff. Average hourly wages rose 3.2 percent in January from a year earlier. That’s just below the annual gain of 3.3 percent in December, which matched October and November for the fastest increase since April 2009.

Teresa Carroll, an executive at the staffing firm Kelly Services, said her company has explained to many clients that they have to pay more to find the workers they need. Some employers are still reluctant to offer higher pay, which has made it harder for them to find and keep workers, she said.

“They’ve enjoyed two decades of minimal pay growth in general,” she said. “It’s our job to educate our clients about the labor market.”

On a monthly basis, from December to January, wages barely rose, though. That’s likely to keep the Federal Reserve unlikely to raise interest rates in the coming months, economists said. Chairman Jerome Powell said earlier this week that the case for raising the Fed’s benchmark rate had weakened. Many economists and investors took that as a sign that a rate increase is unlikely any time in the coming months.

Swonk cautioned that some quirks likely inflated last month’s job gain. For example, some of the furloughed federal workers and contractors who took part-time jobs during the 35-day government shutdown might have been counted as having two jobs during January. Now that the shutdown has ended, these people will go back to being counted as having just one job beginning in February.

And for most of January, the weather was relatively warm in much of the United States, which likely boosted construction employment. Builders added 52,000 jobs, the most in nearly a year.

The strong job market, though, is encouraging more people who weren’t working to begin looking. The proportion of Americans who either have a job or are seeking one — which had been unusually low since the recession ended a decade ago — reached 63.2 percent in January, the highest level in more than five years.

Jessica Jacumin began a permanent job a month ago as a cook at an assisted living facility in Augusta, Georgia, after working there as a paid intern. Before that, she had been out of work and mostly not looking while she spent 18 months studying culinary arts at Helms College, a career school sponsored by Goodwill Industries.

Though Jacumin, 42, and her husband both have Navy pensions, her new job has provided much-needed income and health insurance. That, in turn, has allowed their family to spend a bit more freely.

“I am right now planning our first family vacation in three years,” she said.

Jacumin, her husband and three children will head to Hilton Head in South Carolina in July.

The partial government shutdown caused 800,000 workers to miss two paychecks. But because these workers will eventually receive back pay, they were counted as employed in the survey of businesses that produces the monthly job gain.

The nonpartisan Congressional Budget Office estimates that the shutdown slowed annual growth for the January-March quarter by about 0.4 percentage point, to a rate of 2.1 percent, though that loss should lead to a bounce-back later this year.

The partial government shutdown has delayed the release of a range of government data about the economy, including statistics on housing, factory orders, and fourth-quarter growth.

The reports that have been released have been mixed. The Federal Reserve’s industrial production report showed that manufacturing output rose in December by the most in nearly a year, boosted by auto production. But consumer confidence fell in January for a third straight month.