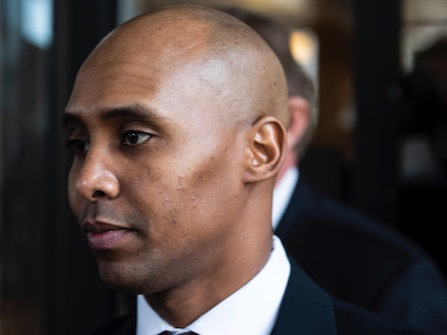 When an unarmed white woman who called 911 to report a crime was fatally shot by a black, Somali American police officer in Minneapolis, the racial dynamic seen in many police shooting cases in the U.S. was flipped on its head, and a different narrative emerged.

Justine Ruszczyk Damond was immediately portrayed as the innocent victim she was, a peaceful woman who was trying to help someone else by calling 911 to report a possible rape in the alley behind her home. The officer, Mohamed Noor, was sharply criticized by the then-police chief, while others wrongly alleged he was a fast-track affirmative action hire for a city trying to diversify its police department.

Noor, 33, was charged — a rarity when an on-duty officer shoots someone — and is now on trial for murder and manslaughter in the July 2017 death of Damond, a 40-year-old dual Australian American citizen.

While Minneapolis police spokesman John Elder said race is never a factor in the department’s personnel decisions or internal investigations, some activists say it’s been part of the equation from the start — from the public portrayals of Damond and Noor, to the fact that Noor was charged and fired from the police force. When the shooting happened, Somali Americans felt singled out because then-Chief Janee Harteau spoke out against Noor’s actions instead of reserving judgment, and the police union was largely silent.

“Race and affluence has played a role in terms of how this case is being handled,” said Nekima Levy Armstrong, a civil rights attorney and former president of the Minneapolis NAACP.

Noor shot Damond as she approached his police SUV. While prosecutors say there’s no evidence of any threat to justify deadly force, Noor’s attorneys argue that he heard a loud bang and feared he and his partner were being ambushed.