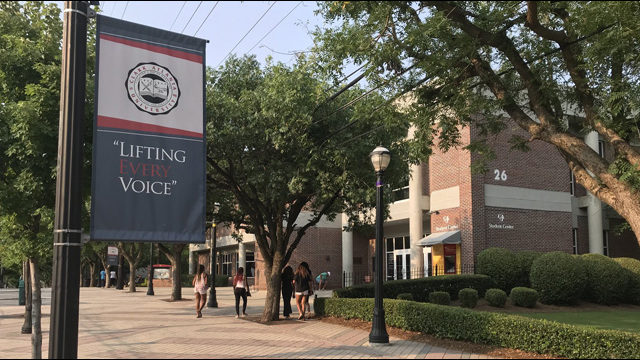 he first day of fall semester brought fear to Clark Atlanta University, where students worried about their safety the day after gunshots were fired into a crowd of 200 people outside the school’s library.

Four students were wounded by gunfire after an argument broke out between two groups at a block party shortly after 10:30 p.m. Tuesday, Atlanta police said. The injured women were all expected to recover.

“It could have been any of us,” Zaire Hammond, a senior from Sacramento, California, said Wednesday along the main walkway across campus. “Stuff like this shouldn’t happen on a school campus.”

The shooter escaped in the chaos outside the library that serves students from Clark Atlanta and other nearby historically black colleges, and no arrests had been made by late Wednesday, Atlanta police said. Police spokesman Carlos Campos released video of a male suspect who authorities want help identifying.

The block party was celebrating the end of new student orientation, and Clark Atlanta student Anais LaFontaine of New York City said Wednesday that she’s concerned about the first-year students.

“I don’t want them to be scared to come back,” she said.

Other students say they want security strengthened on the campus near downtown Atlanta that’s easily accessible to the public.

“Anybody and everybody can walk through here,” said Jada Phillips, a student from Virginia.

School officials did not immediately respond to requests for comment regarding students’ concerns about security.

The gunshots began after an argument broke out between two parties and someone opened fire, investigators said. Video aired by WXIA-TV shows dozens of students running frantically after the gunshots.

“It appears there were two separate groups that were targeting each other, and these people were just caught in the crossfire,” Atlanta police Capt. William Ricker told reporters.

The victims are students at Clark Atlanta and Spelman College, a nearby all-women’s school. Police late Wednesday identified them as Erin Ennis, 18, of Powder Springs, Georgia; Maia Williams-MClaren, 18, of Boston; Elyse Spencer, 18, of Rochester, New York; and Kia Thomas, 19, whose hometown wasn’t available.

“Evil will not have its way on our campus,” it said on social media.

“We are asking our faculty to be aware and prepared to support those students experiencing the effects of this incident,” Clark Atlanta interim President Lucille Maugé said in a message to students.

Gospel music poured onto the campus through the open doors of the historic Rush Memorial Congregational Church on Wednesday afternoon. In the early 1960s, the small chapel housed the offices of the Atlanta Student Movement, which fought discrimination in the South.

The church now caters to many Clark Atlanta students, and music minister Da’Vid De’Vardelevion, who is also a student, said a revival service is planned for 7 p.m. Monday.

“There’s going to be a lot of students here,” he said. “We’re feet away from the incident, so we’re just trusting that the Lord will protect us in here while we’re having revival.”

Atlanta police routinely work with Clark Atlanta’s police department, as they do with campus police at other schools in the city such as Georgia State University and the Georgia Institute of Technology.

“We’re always very much aware when school is open at the campuses inside the city of Atlanta and we do make a concerted effort to work closely with the campus police, and make sure we properly patrol our areas,” Campos said.