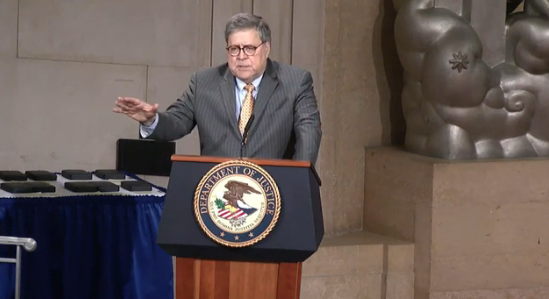 The top law enforcement official of the United States, Attorney General William P. Barr, has come under fire after implying that communities who protest police risk losing the protection of law enforcement.

“They have to start showing, more than they do, the respect and support that law enforcement deserves,” said Barr at the Attorney General’s Distinguished Service in Police awards ceremony in Washington on Tuesday. “And if communities don’t give that support and respect, they may find themselves without the police protection they need,” he added.

Barr did not specify what communities he was referring to, however, most critics perceived the thinly veiled threat to be pointed at minorities.

“The idea that the attorney general of the United States, the nation’s chief law enforcement officer, is recommending abandoning communities as retribution for pushing for police reform or criticizing policing practices, is profoundly dangerous and irresponsible,” said Vanita Gupta, president and chief executive of the Leadership Conference on Civil and Human Rights and the former head of the Justice Department’s Civil rights division, to The New York Times.

Jeb Fain, spokesman for the progressive super PAC American Bridge, told HuffPo the comments were, “as revealing as they are disturbing — flagrantly dismissive of the rights of Americans or color, disrespectful to countless law enforcement officers who work hard to serve their communities and full of a continuing disregard for the rule of the law.”

Barr drew comparisons between the military and police in his speech, perhaps unintentionally evoking the same parallels as those made by movements like Black Lines Matter, who say cops often behave as occupying forces in minority communities.

“During the Vietnam era our country learned a lesson. I remember that our brave troops that served in that conflict weren’t treated very well when they came home, and sometimes they bore the brunt of people who were opposed to the war, and the respect and gratitude owed them was not given. And it took decades for the American people to realize that,” said Barr to a room full of police officers and prosecutors. “But I think today the American people have to focus on something else, which is the sacrifice, service that is given by our law enforcement officers,” added Barr in an attempt to parallel past protests of soldiers to that of present-day protests against law enforcement.

On Twitter, critics of President Donald Trump chimed in, with one saying, “building a dictatorship which is exactly what Trump and Barr are working toward as hard as they can.” Others said, “Barr is just as insane and crazed as his boss,” and “Barr now shaking down marginalized communities.”

One commenter added, “Barr’s divisive comments are unworthy of an AG. We should all be grateful for the sacrifices and service of police officers, but misconduct should be called out and addressed. Blind devotion is not a requirement for receiving police service.”