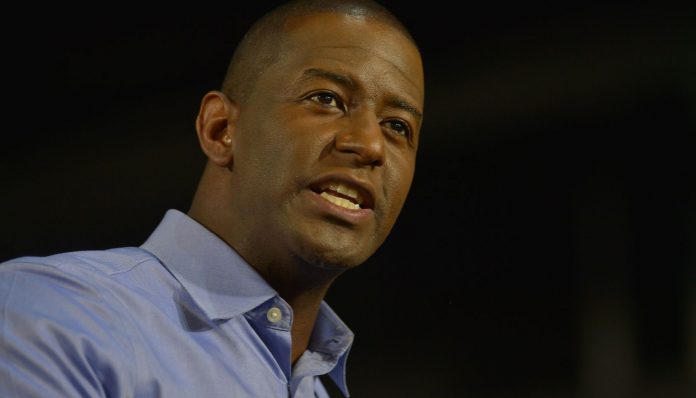 It was nearly 12 months ago that Andrew Gillum was on the brink of going from the mayor of Florida’s capital city to governing the entire Sunshine State. But now, to let the powerful internet rumor mill tell it, the proud HBCUgraduate could become the next Democratic presidential candidate’s vice-presidential running mate.

What a difference a year can make.

According to widespread reports, Massachusetts Sen. and surging Democratic presidential candidate Elizabeth Warren has been in regular contact with Gillum in what political experts said was an attempt to groom him to join her ticket. Warren told the Daily Beast, which broke the news Thursday afternoon, “that is baseless and not at all true.” But that’s probably because to confirm it would be to imply that she believed was the presumed nominee, a title that won’t be decided for many months to come.

With the report, which was broken by the Daily Beast on Thursday afternoon, Gillum joined Stacey Abrams as the second of two allegedly preferred vice-presidential running mates for the two front-running Democratic White House hopefuls. It was reported back in May that Biden was grooming Abrams, the 45-year-old former Georgia State Representative who fell victim to voter suppression waged by her Republican rival back in the midterm elections last year.

Gillum, as Black people in particular remember, was the more-than-qualified Florida gubernatorial candidate who was also cheated out of election success after widespread voter suppression championed and arguably ordered by now-Gov. Ron DeSantis, who made openly racist comments about the Tallahassee mayor during the contentious campaign.

As the Daily Beast noted, the presidential election battle for the historically red state of Florida has always been a hard-fought one, with the victor more times than not being sworn into office in January. Having Gillum, 40, on her side would be a major coup among Black voters, not to mention the Republicans expected to defect from their party over the president’s allegedly treasonous ways. Florida is also where throngs of former felons were expected to have their voting rights restored before Election Day. Lastly, Gillum is a proud graduate of Florida A&M University, a fact that could further endear Warren to students and alumni of historically Black colleges and universities. Those were all possibly Warren’s votes to capitalize on; with the assistance of Gillum, of course.

Many people have argued that for Democrats to be successful in 2020, there must be some semblance of diversity on the ticket instead of only white men. The separate nods to Abrams and Gillum as the only people rumored thus far as potential vice presidential running mates hints at the power that candidates believe Black voters will yield next year. They also offer one unsung aspect of diversity that is age, as both would-be vice-presidential candidates are significantly younger Biden, 76, and Warren, 70, and would probably increase the appeal to coveted Millennial voters.

While Gillum — who is typically in tune with Twitter trending topics (he was the top on Thursday evening) — remained mum on the reports, Abrams has spoken in no uncertain terms on more than one occasion that she was open to being the Democratic nominee’s running mate. Just last month on the sidelines of the annual Congressional Black Caucus Legislative Conference in Washington, D.C., Abrams said she would be “honored” to be considered as the nominee’s vice-presidential candidate.

However, Gillum did tweet one possible hint that could be about the reports. “Many of my friends running to beat @realDonaldTrump call me often — about one thing: how to win Florida,” he tweeted Thursday afternoon before adding later: “Join us. Empower each other.”