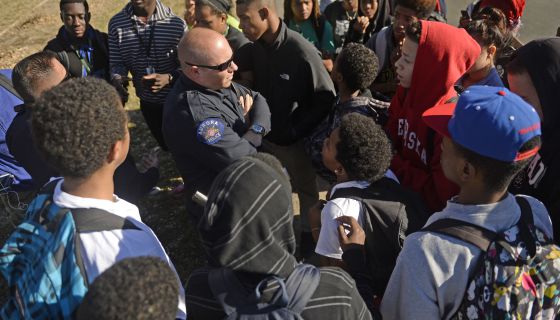 Students of color have received several lessons on police brutality as if it is a subject of study in their schools. Many Black teens have been assaulted by law enforcement or attend schools where their peers have been assaulted or learned about police-involved deaths.

Antwon Rose, a 17-year-old standout honors student, was fatally shot three times in the back by East Pittsburgh Police Officer Michael Rosfeld on June 19. Rosfeld, who has been criminally charged with homicide, had a reported troubling history of brutality. He killed Rose without warning during a traffic stop — a scenario that has all too often ended in the police-involved deaths of people of color. What could have been going through Rose’s mind in those moments may have been summed up by one word: fear.

Feelings of fear about the police have bee documented among African Americans: a NPR poll last October said that 31 percent of Blacks say that fear of discrimination has led them to avoid calling the police when in need.

It’s a fear that has driven many students of color at Pittsburgh’s Woodland Hills High School where Rose attended to speak their truth. Numerous accounts of students being tasered, punched in the face and dragged down hallways like ragdolls by cops have come out of Woodland High. Five current and former students — all of whom are African American and some with special needs— have said that officers physically or verbally abused them in a lawsuit filed last year that is still ongoing, The Huffington Post reported.

A 15-year-old unnamed student was subjected to an unprovoked attack by school police officer Stephen Shaulis who grabbed him, put him in a headlock, dragged him out of an administrative office down a hallway and tasered him at least three times, according to the lawsuit. In an even crazier twist, the officer wasn’t punished but the student was charged with resisting arrest and disorderly conduct.

The stories of police abuse have reached several students.

“When you think about where Antwon went to school,” Summer Lee, 30, who attended Woodland and is now protesting the school over tales of cop-involved terror, said to Huffington. “He saw his friends getting beat up by these cops and how the justice system works against their abusers. Would that not inform your interaction with police officers?”

Lee is rightfully upset by the brutality stories, like several other Black teens and parents who have seen similar situations unfold in schools in their neighborhoods. A North Carolina deputy pepper sprayed a 16-year-old Black male student at Seventy-First High School in Fayetteville, North Carolina in February in an incident caught on video. A Black female student was slammed to the ground by a North Carolina police officer at Rolesville High School in Rolesville last January, with the video sparking outrage but the officer having faced no charges.

Also, students of color at Marjory Stoneman Douglas High School in Parkland, Florida expressed fears over an increasing police presence leading to more brutality at their school following a shooting tragedy that left 17 dead in February.