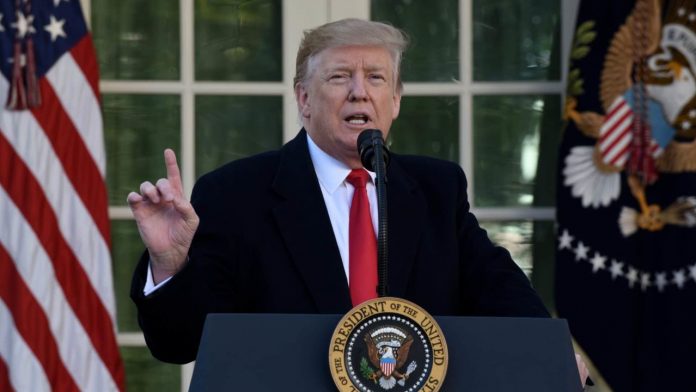 The first line of President Donald Trump’s obituary has been written.

While Trump is all but certain to avoid removal from office, a portion of his legacy took shape Wednesday when he became just the third president in American history to be impeached by the U.S. House.

The two articles of impeachment approved along largely partisan lines on Wednesday stand as a constitutional rebuke that will stay with Trump even as he tries to trivialize their meaning and use them to power his reelection bid.

History books will add Trump to the section that features Bill Clinton, impeached 21 years ago for lying under oath about sex with White House intern Monica Lewinsky, and Andrew Johnson, impeached 151 years ago for defying Congress on Reconstruction. Richard Nixon, who avoided impeachment by resigning during the Watergate investigation, is there, too.

Trump himself is keenly aware of the impact that impeachment may have on his legacy.

Allies in recent months have described him as seething over the prospect, taking impeachment more as a personal attack and an attempt to delegitimize his presidency than a judgment on his conduct. Trump said Tuesday that he took “zero” responsibility for his expected impeachment.

“Few people in high position could have endured or passed this test,” Trump wrote in a fiery six-page letter to House Speaker Nancy Pelosi on the eve of his impeachment. “You do not know, nor do you care, the great damage and hurt you have inflicted upon wonderful and loving members of my family.”

The letter, rife with exclamation points, random capitalizations and scores of grievances, portrayed the president as the victim of an unfair and politically motivated attack.

“One hundred years from now, when people look back at this affair, I want them to understand it, and learn from it, so that it can never happen to another President again,” he wrote.

With Republicans in control of the Senate, Trump’s acquittal in a January trial there seems assured.

He has asserted that a public backlash to impeachment may help him politically by firing up loyal supporters and attracting more independents to his cause. He’s mused about taking a post-verdict victory lap, a veritable “Not Guilty Tour” akin to the “Thank You Tour” he conducted during the 2016 presidential transition.

Presidential historian Jon Meacham said impeachment will make Trump “the first insurgent incumbent president in American history.” He compared the reflexive partisanship of this moment to the 19th-century tribalism that surrounded Johnson and Reconstruction, requiring a divided nation “to assess what’s being said instead of simply saluting the person saying it.”

Uniquely able to command attention, Trump has held sway over his adopted Republican Party, reshaping it in his image even while defying its orthodoxy. He has thrilled his base of supporters with his confrontational style and tough rhetoric, using his combative Twitter account to fight political rivals and dispute from the outset accusations of foreign electoral interference during special counsel Robert Mueller’s Russia probe.

While Trump escaped that episode with his grip on power unchanged, the Ukraine story stunned the White House with the speed that it overwhelmed Washington. Trump fell back on the same playbook — deny, delay, denounce — but could not avoid an impeachment inquiry at the hands of the Democratic-controlled House.

Kellyanne Conway, senior counselor to the president, on Wednesday rejected the notion that Trump believes his legacy will be tarnished by impeachment.

“No, he doesn’t,” Conway said. “He sees it as a stain on the legacy of people who have been so focused and hell-bent on removing him from office.”

While Clinton apologized for his behavior and Nixon stepped aside, Trump has remained unbowed, sticking to his contention that he had a “perfect” phone call with Ukraine’s president. Trump and many of his Republican defenders have rejected the testimony of a parade of government witnesses who testified about Trump’s efforts to push Kyiv to investigate potential election rival Joe Biden.

At a rally in Michigan that began mere minutes after the House began its historic vote, Trump tried to publicly downplay the stain on his record.

“It’s impeachment lite. With Richard Nixon, I could see it as a very dark era,” Trump said. “I don’t know about you, but I’m having a good time. But I also know we have a great group of people behind us in the Republican Party.”

The president’s approval rating has largely remained unchanged during the impeachment inquiry, his pugnacious personality and populism helping cement his hold with supporters.

Extraordinary polarization around impeachment is not new, but the fierce partisanship this time has been heightened by a unique aspect of this moment: Trump is standing for reelection, while Clinton and Nixon were halfway through their second terms when they faced the threat of impeachment.

The outcome of that election may alter how Trump’s impeachment is ultimately remembered.

“Donald Trump is now going to be synonymous with impeachment. There is no way to market it like a badge of honor. It’s a medallion of shame,” said Douglas Brinkley, presidential historian at Rice University.

“But if he wins, the impeachment looks somewhat smaller. It means he defied it and remade the modern Republican Party in his own image and kept them loyal.”

Jonathan Lemire has covered the White House and politics for The Associated Press since 2013.