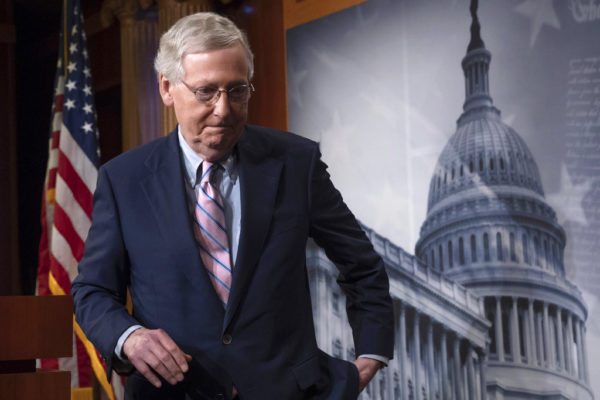 When Mitch McConnell confirmed Tuesday that his ancestors had owned slaves, he didn’t say whether he was surprised to learn about it from an NBC News report the day before. But historians, economists and other scholars say that few Americans should be surprised to find a personal connection — direct or indirect — to the exploitation of slaves.

The slave trade, they say, remains as fundamental to individual and national prosperity as electricity to the Internet.

“I want us to get to the point where we stop being surprised,” said Daina Ramey Berry, a historian at the University of Texas at Austin who wrote “The Price for their Pound of Flesh: The Value of the Enslaved, from Womb to the Grave, in the Building of a Nation.”

“That and when people say, ‘Look, my family didn’t own any slaves, I haven’t benefited,’ I want us to routinely ask, ‘Do you know? Have you checked?’” Berry asked. “‘Have you thought that all the way through or did you just assume because that felt better to you?’”

The nation remains too focused on white feelings, she said, when “we have yet to even begin to concern ourselves as a country with all that happened to the enslaved.”

Readily available public and private documents make it possible to find historical connections to a period that ended only 150 years ago. Multiple individuals and institutions have traced America’s slave past into its present. And the documents used to do so — like the census records used by NBC News to trace McConnell’s ancestry — contain details which begin to make at least rough economic assessments possible too.

“This country’s economic standing in the world and its ongoing racial economic divide started with the mass enslavement of African people and Native American genocide,” said Dedrick Asante-Muhammad, a coordinator at the Institute for Policy Studies Program on Inequality and the Common Good. He is a leading expert on the reasons for the enormous gap in wealth between black and white families in America.

“You simply can not have the pattern of white economic supremacy which has defined this country for the entirety of its existence without,” that enslavement and genocide he said.

Like McConnell’s ancestors in the 1860s, about 25 percent of white American households in the South owned slaves, Berry said. These slave owners averaged 10 or fewer slaves in their possession, but collectively owned most black people living in the United States before the Civil War. And, before the war, the collective value of all the nation’s slaves amounted to more than the value of every other asset or business in the United States combined.

Slaveowners, like today’s owners of the top 1 percent of wealth, were massively influential in local and national politics. They were pillars of their communities, serving as judges, lawyers and doctors, involved in the making of law, the development of the nation’s first police forces and many of its other institutions. Slaveowners’ children ranked among those enrolled at Harvard, Yale and Columbia. Their white workers, business associates and contacts — the other 75 percent of white Southerners as well as many white Americans in the North — largely aspired to join their ranks.

What’s more, American slave-produced cotton came to dominate the global economy, Berry said. American cotton was, by the 1850s, as essential to global markets as oil is today. And, because of the nation’s slave workforce, entire industries developed in ways that created jobs open only to whites, allowing some white Americans to make economic gains.

Slaves were bought and sold, insured, rented or leased, lent, willed and used to settle debt.

From the documents created by this activity, Berry gathered data on the appraised prices of about 55,000 slaves in the 1860s. (Prices often spiked at slave auctions). So the details of McConnell’s family slave holdings that show up in census records from the 1850s and 1860s do allow for some sense of what the family derived, Berry said.

Branches of McConnell’s family owned at least 14slaves, most of them children. In the 1860s, the average slave girl younger than 10 was appraised at $190, which equals $5,571 in 2014 dollars, when Ramey conducted her analysis. The average slave boy in the same age range had an appraised value of $212. That amounted to $6,241 in 2014 dollars. When old enough to work, they also produced valuable goods with no pay.

CONGRESSMcConnell likens himself to Obama: ‘We both are the descendants of slave owners’

Also worth noting: All but two of the McConnell ancestors’ slaves are listed as mulattos, Berry said. In most cases, such slaves were the mixed-race progeny of their current or past owners. They were born to violated slave women who under the law produced children born slaves.

While the direct value of those slaves disappeared off the books of slave-holding families with emancipation in 1863, some land ownership and the other intergenerational proceeds of slave-made wealth remained, said Asante-Muhammad.

Those benefits were made exponentially more powerful for all white Americans by social practice and policy, said Asante-Muhammad. That’s because of the horrors of the Jim Crow era, the exclusion of the jobs most African American and Latino workers held from the first decades of the Social Security program, redlining, school segregation and black school resource starvation, allowing only white Americans reliable access to the benefits of the GI Bill, brutal policing, discrimination in lending and, the list goes on.

“We,” said Asante-Muhammad, “have not completely eliminated this pattern or made a specific effort to address what it has already done. Policy today, or some policy, continues to advantage white Americans.”

In Alabama, where McConnell’s slave-owning ancestors lived, census data indicates that between 2013 and 2017 an average of 75.7 percent of white residents owned their homes, compared to 50.9 percent of black families. About 26.9 percent of the white population had a college education or better, while 16.9 percent of black residents had the same. And median earnings for white heads of households were $53,012, compared to $31,183 for black heads of households. (To find data for your area, zoom in on these maps and click on your state, county or city.)

“I know this cuts to the quick, to the core of the American myth, this idea that hard work and education are all you need,” said Asante-Muhammad, after pointing out that black Americans have made significant gains in college attendance. “But the data, they tell the tale. What’s even more telling is wealth, the racial wealth gap. At no point in history has it ever been bridged.”

In 1983, almost 120 years after the end of slavery, white Americans enjoyed a median household wealth — that’s the value of all assets minus all debt — of $105,300, according to data gathered by the Federal Deposit Insurance Corporation, a federal agency. For black Americans, that figure was $7,000 and for Latinos it was $4,000.

After a limited expansion for blacks and significant growth for whites in the 1990s, the Great Recession opened a drain. Even white median wealth has never recovered to pre-recession levels. In 2016, it sat at $140,500. Meanwhile, black median wealth remained below its Reagan-era levels in 2016. Black wealth amounted to $3,400 and Latino median wealth $6,300. (To understand the actual, rather than mythical or stereotypical causes of the racial wealth gap, try this simulation).

“Race is at the root of our country and so many of our family’s financial foundations,” said Asante-Muhammad.

The nation’s non-white population is growing. But, if current wealth patterns remain, the United States can not remain a middle-class or wealthy country, he said.

“Yet, to this day,” said Asante-Muhammad, “it’s the conversation about reparations that’s regarded — by McConnell and others in favor of concentrating wealth in the hands of a few who are already wealthy — as impractical. To paraphrase Dr. King, and I think it’s apt here, ‘The majority of white Americans consider themselves sincerely committed to justice. But, this is a fantasy of self-deception and comfortable vanity.’”