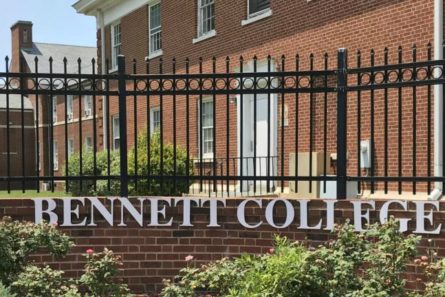 After a 54-day race to raise $5 million and maintain accreditation, Bennett College has managed to surpass that goal.

The historically Black women’s college announced at a Feb. 4 press conference that it has raised $8.2 million through its Stand with Bennett campaign, which began in December. At the time, the institution lost its membership with the Southern Association of Colleges and Schools Commission on Colleges. The accrediting board cited financial reasons for the school’s removal. Immediately afterward, however, Bennett appealed the decision and remains accredited on probation throughout the appeal process.

The formal appeal to keep the Greensboro, N.C., college’s accreditation is scheduled for Feb. 18. The accreditation board’s decision will be shared with the school on Feb. 25, according to WXII12. A spokesperson with the SACSCOC told the station there was no set amount that the institution was required to raise.

The funds raised will help bolster the formal appeals process.

While the school closed in on its Feb. 1 deadline for its fundraising goal, two $1 million donations and many other gifts from HBCU students, alumnae and organizations like Alpha Kappa Alpha Sorority, Inc. pushed it over the edge.

“What matters most is that every dollar counts toward our goal. What matters most is people gave — and they gave from their heart,” Bennett President Phyllis Dawkins, who said at the news conference that funds were still being counted, told the Greensboro News & Record. “The outpouring of love and support that Bennett received during this campaign is just amazing. … Some might even call it a miracle.”

AKA pledged $100,000 to Bennett, while High Point University gifted the school with $1 million on Feb. 1. That hefty gift put the college within 95 percent of its goal, and High Point President Nido Qubein showed up to Monday’s ceremony with a $357,500 check from funds he had collected from supporters over the weekend. Additionally, another $1 million was granted through Kwanza Jones and José E. Feliciano, a Los Angeles couple who founded the Supercharged Initiative, a philanthropic grantmaking and investment organization. Jones, a pop singer, has a mother and relatives who attended Bennett.

To top it all off, after noted Bennett backer and actor Jussie Smollett was the target of an alleged hate crime last week, his fans responded by backing the HBCU in droves to honor him.

Founded in 1873, Bennett College is one of only two women-only HBCUs in America, with Atlanta’s Spelman College being the other.