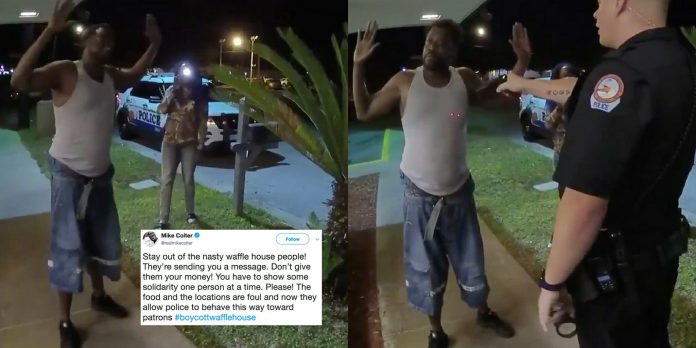 On May 2, at a Waffle House in Fort Walton Beach, Florida, a couple, identified in a police report as Donald Copeland and Ms. Hart, placed a to-go order around 1 a.m. Before receiving their food, a glass of orange juice arrived, which started the dispute.

According to TheState.com, “The couple said the menu listed the price of the orange juice at $1, but they were charged $2.50 for the drink on their bill. They argued the charge and refused to pay the additional $1.50, according to the video.”

The couple called the 1-800 customer service to complain, but the Waffle House employee called the police. In the police report, the employee accused the man of “being irate screaming and cussing.”

Once the cops arrived, they immediately took the side of Waffle House, demanding the couple come outside, and then saying they needed to go back inside to pay a bill for food they never received. Officers handcuff Copeland, put him in the back of the car and then handcuffed Hart. At one point in the video, you can hear Hart say, “We didn’t get no food or nothing in front of us. We didn’t get nothing from them, nothing at all. We haven’t been served at all. We haven’t been served so how is it theft? We asked her to explain the bill to us, she gave us no food or nothing and called you guys.”

The cops also mock them for arguing over a dollar, even after the woman tries to explain they were overcharged and never received food. TheState.com reports, “The couple was released after they agreed to pay the bill and to not return to that Waffle House again, the police report confirmed. The report added: ‘The subjects were later provided the opportunity to pay for their order, which they accepted. Therefore, (they) were released without criminal charges.’”

After outrage on social media, Fort Walton Beach Police Department released the following statement, “The cell phone video being shared only shows a small part of the incident and does not include that the individuals detained were released after the situation calmed and the bill in question was satisfied — which is what the officers were trying to achieve from the beginning.” The statement continued, “We met with other interested parties in regard to this matter and all parties involved determined that while there was no misconduct of the officers that the situation could have been handled differently by both parties involved.”

Clearly, these cops have poor deescalation skills, because if they had spoken to both parties before assuming the Black couple were criminals, this incident wouldn’t have happened.