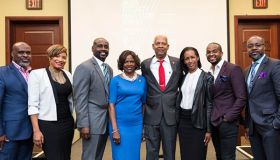 There is so much power that lies in controlling your own narrative. However due to the lack of diversity within the media industry authentic stories about the Black experience are often excluded, misconstrued or disregarded leaving several individuals feeling unseen and unheard. The Multicultural Media Correspondents Association is on a mission to tackle the lack of racial representation when it comes to ownership and leadership in the media industry.

The organization recently hosted a forum in Orlando that gathered influential Black leaders in the media space to share their experiences and develop strategies to evoke change. The summit—dubbed Taking Control of the Media Diversity Crisis—explored how the racial gap in media ownership directly impacts how the Black community is perceived by others and how African Americans see themselves. It also examined how the decline in platforms owned by people of color has changed the landscape of civic engagement and efforts to create political change.

Amongst the individuals who participated in the summit were iOne Digital President Detavio Samuels and Lori Hall who serves as the Senior Vice President of Consumer Marketing at TV One. Samuels and Hall were featured on a panel that explored diversity and inclusion practices in the media industry and how policymakers can play a role in holding major media companies accountable when it comes to taking corrective action. Other panels that took place during the summit examined the obstacles faced by media owners of color, controlling the narratives in the realm of advertising, and the importance of cultural competency in the media. Influential industry leaders who were apart of these discussions included Erika Alexander, Co-Founder of Color Farm Media, Tanya Grieg Perara, EVP, Comcast NBC Universal, L. Londell McMillan, Attorney and Owner of The Source Magazine, Tirrell D. Whittley, CEO, Liquid Soul and others. It was hosted by Congresswoman Val Demings. “The need for greater media diversity is a national priority. MMCA is committed to moving the needle on media diversity and to be a trusted bridge that brings together policy makers and the media advocacy community to make an impact,” said David Morgan, Founder and President of the MMCA, in a statement. “As an advocate for and a resource to journalists, creatives and other media stakeholders of color, we are excited by the growing support for the MMCA.”

Forums like the one led by MMCA are needed. There still are wide racial gaps in film, television, print, and digital ownership. Research shows that less than 1 percent of commercial TV stations are Black-owned.