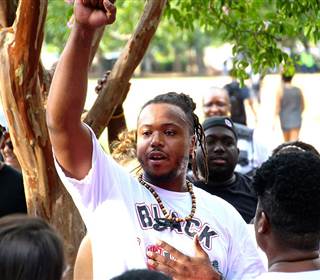 A Black Lives Matter activist who made headlines after video of him wrestling a Confederate flag out the hands of a protester in Charleston, South Carolina, went viral, was shot and killed in New Orleans on Tuesday.

A spokesperson with the New Orleans police department confirmed the death of 32-year-old Muhiyidin Moye, who went by Muhiyidin d’Baha, to NBC News in an email Wednesday. Police said d’Baha was shot in the thigh early Tuesday morning and transported to a nearby hospital where he died from his injuries.

It is unclear the details surrounding his death, but according to a police report, police dispatch received a call that a black male was laying on the ground and asking for help. When an officer arrived on the scene, a black male was found bleeding and a bicycle covered in blood not far from his body. Police also found a trail of blood leading away from the scene, a hat and fragments of a bullet in a grassy area. The report also says the officer was wearing a body camera and it was activated. A suspect has not been named, but the report also shows a black male is wanted for aggravated battery.

WCBD, an NBC-affliate, reports d’Baha was in New Orleans for work with his social justice organization. D’Baha’s niece, Camille, created a GoFundMe page to raise money to get the activist home andfor his memorial service. As of Wednesday afternoon, over $22,000 had been raised.

“We don’t have many details, but will update as soon as we do,” she said on the page. “This is all so unexpected.”

On Tuesday night, friends and family along with local civil rights activists gathered at a prayer vigil in front of North Charleston City Hall. Chanting ‘Black Lives Matter’ and sharing memories of d’Baha, members of the community discussed his legacy and plans to keep his name alive.

“When you have somebody who is that close and dedicates himself to uplifting the community and actually being a part of the community, he’s a valuable piece of the puzzle,” activist Johnathan Thrower told WCBD. “The intellectualism, the fire, the desire, the motivation, the way he rallied people in the city was just second to none.”

D’Baha made national headlines in February 2017 when he was filmed on live TV hurling himself over a police line and wrestling a Confederate flag out of the hands of a white protester outside a rally in Charleston.

Although he was quickly arrested, video of the dramatic leap quickly went viral online. D’Baha later told The Washington Post that he felt compelled to act after he noticed black community “elders” react to the Confederate flag.

D’Baha was a prominent and vocal fixture in Charleston’s Black Lives Matter movement, often organizing rallies or demanding accountability from the city’s leaders during public meetings.

In a 2015 interview with the New Yorker, d’Baha reflected bitterly on the black community’s reaction to the Charleston Church massacre and calls for prayers and forgiveness for Dylann Roof.

“That was accommodating white feelings and white superiority,” d’Baha told the New Yorker. “It was ‘Yes, Massa, can I have another?”

It was that sense of merely “enduring” instead of forcing circumstances to change that d’Baha said forced him into activism, and sets the modern day Black Lives Matter movement apart from the older generation of civil rights protesters.

Black Lives Matter activist Deray McKesson, who met d’Baha in 2015 during organizing efforts in Charleston, told NBC News d’Baha was an “incredible guy and all around good person.”

“This is a monumental loss in the organizing community and in general,” McKesson said in phone interview. “He was a quiet power and understood the importance of helping people find the power they didn’t know they had.”