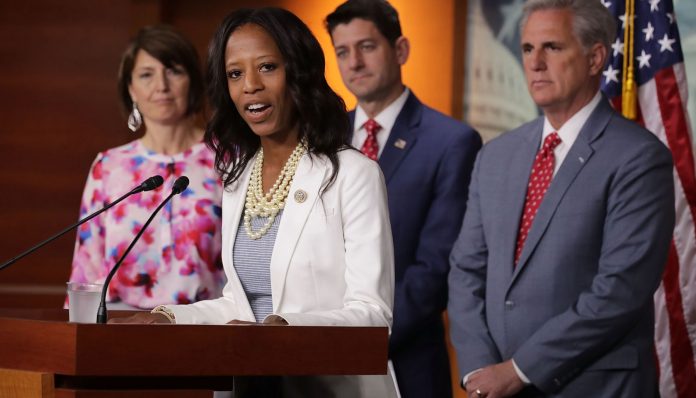 Utah’s Republican Rep. Mia Love, who’s Black, is doing everything to defend her congressional seat in a tight race—including playing the race card against Democrats.

“They do not like the fact that I am a Black female Republican doing everything I possibly can to talk about the issues that help people go from the lowest common denominator up,” Love said in the interview.

Love, seeking her third term in Congress, has found herself in a tight race. Utah is a red state, but many residents of the 4th District have been showing love to the congresswoman’s opponent, Salt Lake County Mayor Ben McAdams.

A Salt Lake Tribune poll in June found that Love had just a six-point lead over McAdams.

The congresswoman was fighting for her political life while embroiled in a campaign finance scandal. Love was in hot water with the Federal Election Commission (FEC) over her team improperly raising more than a million dollars for a primary election that was never expected to happen.

During the Fox interview, Love lashed out about the political ads against her.

“They want to just do character assassination, and I’m telling you what Brian, I’m not going to allow them to do that,” she told host Brian Kilmeade. “This is absolutely — it’s below me. … This is something that’s happening not just to me, but around the country. This is the way that they’re trying to win. They will buy, they will cheat, they will assassinate your character to try and win.”

But Love has also fired off negative ads, tying McAdams to President Bill Clinton and Hillary Clinton in one of them.