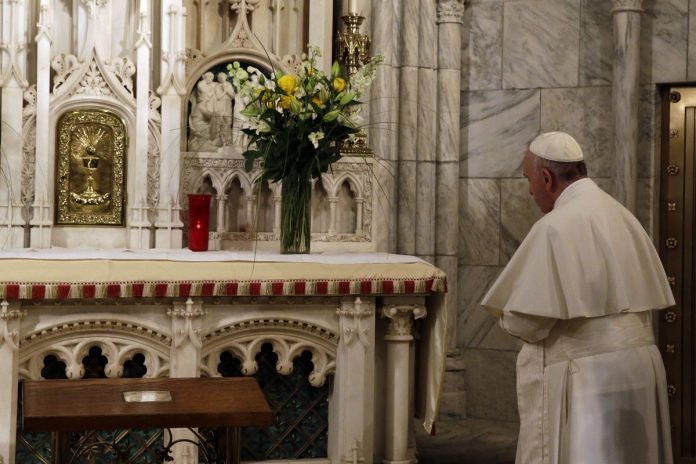 Two Black male victims who received settlements over sexual abuse allegations against Catholic priests are coming forward to revealing that they were paid far less than white victims.

The Associated Press reports the Diocese secretly paid two Black men from Mississippi $15,000 each, requiring them both to sign NDAs (Non-Disclosure Agreements).

According to CBS, in 2006, the Catholic Diocese of Jackson reportedly settled lawsuits brought on by 19 different victims. Of those survivors, 17 are white and were paid at least $250,000 each ( some got as much as $1.3 million) in similar settlements.

A Franciscan Friars official claims the settlement amounts had nothing to due with the two Black men’s race.

One victim, La Jarvis D. Love, who accused two Catholic priests of sexual abuse when he was 9-years-old, received a $15,000 payout during a meeting at an IHOP restaurant.

“He said if I wanted more, I would have to get a lawyer and have my lawyer call his lawyer,” Love said Rev. James G. Gannon, leader of a group of Wisconsin-based Franciscan Friars replied. “Well, we don’t have lawyers. We felt like we had to take what we could.”

At the time, Love was reportedly unaware other accusers who were white were paid significantly more in similar settlements when he was confronted by Rev. Gannon with legal paperwork.

Love’s cousin, Joshua K. Love, who also experienced physical and sexual abuse, was initially offered only $10,000. He eventually settled his abuse claim for $15,000. “They felt they could treat us that way because we’re poor and we’re Black,” he said.

In 2018, the St. Paul-Minneapolis archdiocese agreed to pay an average of nearly $500,000 each to clergy abusesurvivor.

Both men were attending St Francis of Assisi School when they were sexually assaulted by two Franciscans, Brother Paul West and Brother Donald Lucas, as small children. They claim they were beaten, raped, and forced to perform sexual acts.

Joshua recounted how, on some occasions, Brother West “gave me the option to whup me or play with my penis,” he said.

Brother West, now 59-years-old, declined to answer questions. Brother Lucas was found dead in a church in 1999 of an apparent suicide.

During an interview with the Associated Press, Rev. Gannon said he believes both La Jarvis and Joshua’s allegations. “We’ve hurt them tremendously and no amount of money would ever account for what happened to them,” he said.

In 2002, the United States Conference of Catholic Bishops pledged to respond to abuse allegations in an “open and transparent” manner. Earlier this year, a mandatory church law was issued by Pope Francis requiring all Catholic officials to report sexual abuse, and abuse cover-ups, to their superiors.