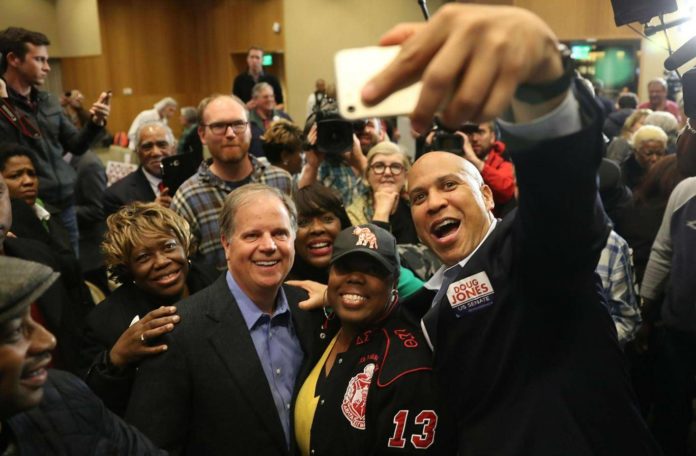 Democratic Senate candidate Doug Jones, who is running against Republican Roy Moore, is courting the Black vote, and that could make all the different in the Senate race.

On Sunday, Jones spent the day with top Black lawmakers like New Jersey Senator Cory Booker as they stumped for the Democratic candidate.

“Will we now raise up the echoes and let people know that democracy is not a spectator sport? You can’t sit on the sidelines and cheer for teams to win. You have to get into the game, it is a full-contact, participatory endeavor,” Booker told a crowd of Jones supporters. “The opposite of justice is not injustice, it is inaction, it is indifference, silence. We have to remind people that faith without works is dead.”

Doug has deep ties to Alabama and its racial history. As a U.S. Attorney, he prosecuted the klansmen who bombed the 16th Street Baptist Church during the Civil Rights Movement.

While Alabama has traditionally been a deeply Republican state, Jones hopes to flip the Senate seat with not only a strong coalition of minority voters but also the support of moderate voters and others who might be turned off by the allegations of sexual abuse against teenage girls that have been leveled against Moore.

“I think that Doug Jones has built the coalition that I dream for Democrats to go and make a comeback,” said state Rep. Anthony Daniels,  the Democratic leader in the state House. “They’ve built a really good coalition that reflects the state of Alabama and its diversity.”