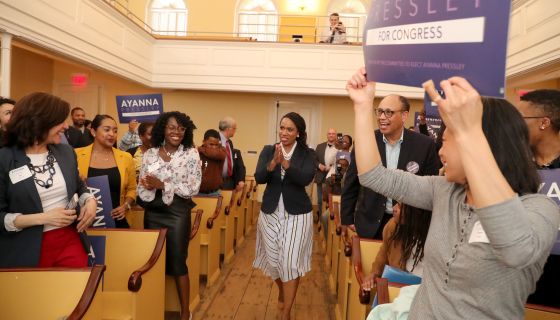 A political spotlight is shining on Ayanna Pressley, a Black female Democrat running for Congress who could ride a wave of energy and unseat an incumbent white candidate—despite getting no support from the Democratic establishment.

Momentum is growing for Pressley’s primary race in Massachusetts against Democratic U.S. Rep. Michael Capuano. It comes after Alexandria Ocasio-Cortez in New York pulled off an upset victory in a similar race in June against a Democratic establishment candidate.

After her win, Ocasio-Cortez called on a growing swell of progressive Democrats, many of whom are younger voters demanding a more aggressive response to President Donald Trump, to back Pressley in her Sept. 4 race, according to Politico.

They responded. Pressley saw a spike in donations, volunteers and visitors to her campaign website.

Support from party’s leaders and organizations can boost campaigns by helping candidates raise funds and gain name recognition. A stamp of approval from the DCCC or individual top Democrats could make a huge difference.

Despite the neglect, Black female candidates have a string of impressive victories in this election cycle—some of them, like San Francisco’s Mayor-elect London Breed, making history.

Consequently, Capuano, a 10-term incumbent, received the endorsement in May of the Congressional Black Caucus PAC, as well as Massachusetts’ former Gov. Deval Patrick, who is African-American.

If she wins, Pressley, a 44-year-old Boston City Councilmember, would be the only African-American congressional delegate from the state. Pressley feels encouraged, despite the uphill climb against her well-funded opponent, who has a campaign war chest of $1.4 million.

“Alex [Ocasio-Cortez] and her race is an inspiring one because it challenges conventional wisdom and narratives about who has a right to run and when, and who can win,” Pressley told The Associated Press. “We have to be disruptive in our democracy and our policy-making and how we run and win elections.”