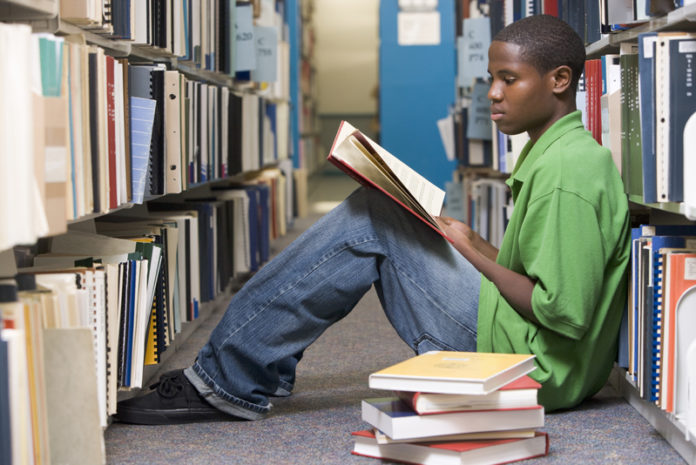 Derrick and Ramunda Young love books as much as they love their people. When they decided to expand their 10-year-old online black-owned bookstore, MahoganyBooks, and open a brick-and-mortar store, they chose Washington, D.C.’s Anacostia neighborhood, which was without a bookstore for several years.

When Derrick was a child, he spent a lot of time with his grandmother in the neighborhood, which has a wealthy black history. He wanted to invest in the neighborhood that nurtured him in his youth and reverse its designation as a book desert and make books available for children and adults there who love them.

“A book desert isn’t a community-created situation,” said Derrick, 40, who opened the store in the Anacostia Arts Center. “It’s because other people have decided not to invest into these communities. It’s not because these communities aren’t readers…Who better to invest in our people than us?”

Anacostia is one of the nation’s top book deserts that researchers studied last year. Researchers found that there are so few books available for sale for youth in Anacostia that 830 children would have to share one book. In a 2016 study, researchers found that book deserts exist when there is a rise in income segregation. This negatively impacts a family’s capability to provide reading material for their children and that ultimately affects a child’s chances to succeed academically.

Susan B. Neuman, professor of childhood and literacy education at New York University, studied six neighborhoods across the nation, including Anacostia, which experienced “income segregation.”

The lack of available children’s reading material along with the poverty rate made these neighborhoods book deserts and areas where their opportunities to be ready for school were low, she said. In Anacostia, Neuman and her research team surveyed 21 miles in the area and found 137 businesses and only four of them sold print resources, none of them sold books for preschoolers. Only one drugstore sold five books.

“The neighborhood was literally bereft of print…We couldn’t find the newspaper,” Neuman said. “There is the assumption that people aren’t reading but they do. They want to read. They want to become informed.”

But Anacostia isn’t the only American neighborhood that is a book desert. Neuman’s research team also found that low-income families have little access to books in Detroit and Los Angeles.

The lack of books for sale in a neighborhood not only makes it difficult for parents to model healthy reading habits for their children, it’s also a barrier for children to maintain literacy in the summer when school is out and literacy programs halt, Neuman said.

“This is a big deal because of the summer slide and many of the children who have limited activities during the summer their achievement scores go way down because there’s so little stimulation,” she said.

Parents in neighborhoods that are book deserts don’t always use public libraries because they represent government and all of the negative associations parents might have with it, Neuman said.

If children of color don’t have culturally relevant books during their formative years their identity will be affected and they won’t have a true sense of their history, said Derrick Barnes, author of “Crown: An Ode to the Fresh Cut,” one of Kirkus Reviews’ best picture books of 2017.

“I speak to black parents all of the time and they are still hungry for stories that feature black children just being children,” said Barnes, also the author of the Ruby and the Booker Boys series. “People will buy if you offer them material that speaks to them…I’m trying to paint these positive human images of black children and in particular black boys.”

MahoganyBooks offers books about black and Latino children, including some books in Spanish through a partnership with the mobile bookstore Duende District, which caters to Latino, immigrant and black readers. Since the store opened on Nov. 24, the Youngs said most of their customers are from the neighborhood and some are already frequent shoppers.

“That to me is a testament that people are receiving what we’re going,” said Ramunda Young, 42. “We’ve got regulars already and we’ve only been here four or five weeks. There are people coming in here two or three times a week already.”

The Youngs want MahoganyBooks to not only provide books for the community, they want their store to be a center for literary activity where they foster the work of emerging authors, offer classes, book signings and book drives.

Opening a bookstore like MahoganyBooks in a place that people already visit can be good a solution to book deserts, Neuman said. She hopes to see neighborhoods and businesses make children’s reading material available in nail, beauty and barbershops, dollar stores and others places that people frequent with their children. Neuman wants to see innovative solutions to book deserts similar to those that have been developed to address food deserts.

“There’s this overriding notion that poor people don’t care about the achievement of their children,” she said. “But this is wrong. If the proprietors would have books, people would buy them.”