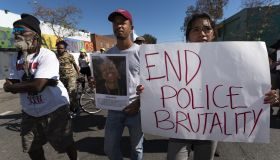 Don’t be surprised if the Baltimore cop disciplined by his bosses for beating up a man on Saturday (August 11) turns up in another police department.

However, it’s not unusual for police officers guilty of misconduct to land another job in a different department. That’s because few police departments have a robust system to decertify cops.

The officer was caught on video pummeling McGrier, who did not fight back. He could be heard shouting on the video, “For what?” to the cop, followed by, “Don’t touch me.”

Ignoring McGrier, the officer is seen bashing him with his fists and eventually forcing him to the ground, leaving the man bleeding from the mouth. He suffered a broken jaw and other injuries, but was not arrested.

Police officers were on a “crime suppression detail,” the Baltimore police stated. Things escalated after McGrier refused to show identification.

Reportedly, there was a previous encounter, which was also caught on video, between the two men that resulted in McGrier being arrested.

Although the officer resigned, the incident remained under criminal investigation. Meanwhile, the second officer at the scene, who failed to intervene, was placed on administrative duties, a department’s tweet said.

Misconduct while in uniform doesn’t necessarily end law enforcement careers. A Washington Post analysis found that New Orleans’ scandal-ridden police department removed at least 248 officers over the past decade. However, about 53 of them are back in uniform in other departments.

Indeed, roughly 30,000 officers nationwide have been decertified for misconduct since the late 1960s, Roger Goldman, a law professor emeritus with Saint Louis University, told The Atlantic. That’s a small number for a five-decade span, with just three states accounting for half of that figure: Florida, Georgia and North Carolina.