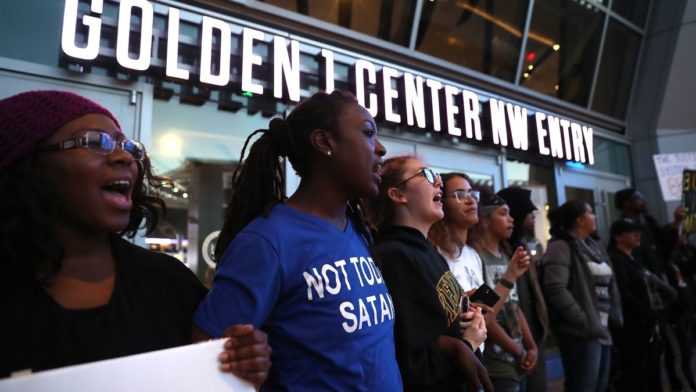 Nearly a week after two Sacramento police officers fatally shot an unarmed black man, prompting angry protests, one cop has seemingly escaped the ire of those in the streets — the chief of police.

Sacramento’s first African-American police chief, Daniel Hahn, has continued to be a source of hope — or at least neutrality — for activists and community members even as they rail at the rank and file over the death of Stephon Clark, shot at 20 times by two officers while holding a cell phone in his grandparents’ backyard.

Protesters raged at police from noon to midnight Friday in marches downtown and in Meadowview, where the shooting occurred. They confronted individual officers, screaming obscenities inches from their faces, which were shielded by riot gear. At one point in the afternoon, several protesters singled out an African-American CHP officer, suggesting in a minutes-long tirade that he was a traitor to his people.

But many activists have more tempered words for Hahn.

“I think his intentions and his heart are in a good place,” said Sonia Lewis, a member of Black Lives Matter and a relative of Stephon Clark. “The system is corrupt so one man being in a position that is seemingly a position of power cannot effectively bring change if the system doesn’t want to change.”

Berry Accius, a community activist who has pushed police reforms for years and helped organize the Meadowview march, added, “The bigger picture is really that Chief Hahn is not even really the source of our frustration. … It’s the system. If anything, we are trying to help make his job easier because we know that it’s bigger than Chief Hahn.”

On Saturday, Hahn used some of that capital to advocate for peace.

Sacramento Bee columnist Marcos Breton talks with Daniel Hahn, Sacramento’s next police chief, about growing up in Oak Park, being a cop in the town where he grew up and the strong influence of his mother. Randall BentonThe Sacramento Bee

“That’s what I’ve been doing all day today, working for people to call for calm,” Hahn said Saturday evening. “People are tired. They are going to get weary, and sooner or later somebody is going to break and that is going to set it off. … We are not too far away from even more violence, more unrest, more of what we see happen in other cities. All it’s going to take is one little something.”

Hahn was raised in the working class neighborhood of Oak Park, and served for years in the Sacramento Police Department before leaving to become chief of nearby Roseville. His hiring as Sacramento chief last summer was a much-lauded homecoming for not just a son of the city, but a son of the neighborhoods where police have lost trust after years of perceived neglect and bias.

After another black man, Joseph Mann, was shot by Sacramento police in the summer of 2016, the city faced upheaval similar to what the Clark shooting has brought.