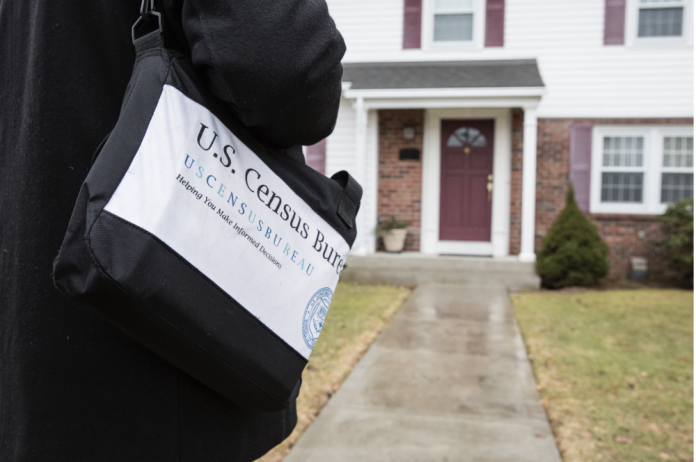 New evidence paints a “disturbing picture” that racial discrimination may be the motive behind the Trump administration’s push to ask everyone in the country about citizenship status, a federal judge wrote in a Monday filing.

“It is becoming difficult to avoid seeing that which is increasingly clear. As more puzzle pieces are placed on the mat, a disturbing picture of the decisionmakers’ motives takes shape,” Hazel wrote.

The U.S. Supreme Court could soon render Hazel’s decision moot. The country’s highest court is expected to decide this week whether the Trump administration can add a citizenship question to the 2020 census.

But the federal judge’s opinion appears to strongly buttress arguments from voting rights activists who assert that newly discovered emails from a deceased Republican architect of political maps show the proposed citizenship question was intended to discriminate in an effort to restrict the political power of Democrats and Latino communities.

Democrats fear the citizenship question will reduce census participation in immigrant-heavy communities and result in a severe undercount of legitimate voters who fear revealing their immigration status to federal officials.

They say they want specific documents to determine why Ross added the question to the 2020 census and contend the administration has declined to provide the documents despite repeated requests.

Ross, who oversees the Census Bureau, said in a memo last year that the Justice Department wants to ask the question to gather data to help identify majority-minority congressional districts, which the Voting Rights Act calls for when possible.

But a recently discovered trove of computer documents from Republican operative Tom Hofeller, who died last year, included detailed calculations that lay out gains Republicans would see in Texas by basing legislative districts on the number of voting-age citizens rather than the total population. The late North Carolina redistricting expert said in the documents that GOP gains would be possible only if the census asked every household about its members’ immigration status for the first time since 1950.

In his written opinion, Hazel said the new evidence shows that Hofeller was “the first person” to talk to Mark Neuman, a Commerce Department transition official who played an “outsized role” advising Ross on census decisions, regarding the addition of a citizenship question. He references evidence found on Hofeller’s computer drives showing he contributed key wording to a Justice Department letter used to justify the question on the grounds that it was needed to protect minority voting rights.

“Plaintiffs’ new evidence potentially connects the dots between a discriminatory purpose — diluting Hispanics’ political power — and Secretary Ross’s decision. The evidence suggests that Dr. Hofeller was motivated to recommend the addition of a citizenship question to the 2020 Census to advantage Republicans,” the U.S. judge wrote.

If the case gets remanded, Hazel wrote that he would reopen discovery for 45 days, order an evidentiary hearing and issue a “speedy ruling.” Hazel had ruled in April to block the addition of the citizenship question, but found at the time that the voting rights activists failed to prove their equal protection rights were violated. His ability to consider the case further based on the new evidence would depend on a federal appeals court returning it to him.

Whether the citizenship question ends up on the 2020 Census is up to the Supreme Court. The nation’s top court is deciding whether it should be allowed after several states sued calling for the question to be removed.Y’all President Still Won’t Admit He Was Wrong About The Central Park Five12 PHOTOS