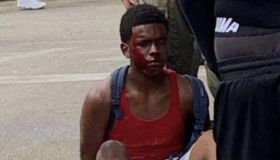 A pair of Broward Sheriff’s Office deputies seen on video pepper-spraying, tackling, and punching a Black Florida teen in a violent takedown earlier this month faced louder calls for their prosecution at a rally in which the teen’s mom spoke this past Saturday.

The deputies in question — Christopher Krickovich and Sgt. Greg LaCerra — have been suspended with pay amid growing demands that they are fired. Meanwhile, all charges against 15–year–old DeLucca Rolle, who suffered a broken nose during his violent encounter with police, have been dropped.

The young man was initially charged with assaulting an officer and resisting arrest without violence.

The incident unfolded April 18 as several students from J.P. Taravella High School gathered outside the local McDonald’s in Tamarac, Florida, to see a fight. The deputies, who were already on patrol in the area, allegedly threatened to pepper-spray the students if they didn’t disperse.

It wasn’t long before things spiraled out of control, however.

Video from the incident showed the officers using brutal force against Rolle, a ninth-grader, forcing him to the ground before striking him several times in the head. At least one deputy is seen slamming the young man’s face into the pavement until he bleeds.

“What are you doing?!” a fellow student is heard shouting. “He’s bleeding!”

Rolle’s mother, Clintina Rolle, said footage of the officers manhandling her son were painful to watch. She said she learned of her son’s arrest after she was contacted by one of the deputies later that day.

At Saturday’s rally at a park in North Lauderdale, Florida, Clintina Rolle appealed to parents, saying, “Regardless of our color, it could have been any one of our [children] that could have been on the ground.”

Rolle, whose son did not attend the rally, said Delucca Rolle has been keeping himself “locked away in his room by himself to keep away from this.”

According to a police report, the deputies were in the process of arresting a different teen when Rolle reportedly got involved. While the first student was being detained, his cellphone slipped out of his pocket. Rolle bent down to pick it up.

Authorities claim the teen then took “an aggressive stance” toward one of the deputies and started “clenching his fists,” prompting the deputy to tackle the 15-year-old.

“With the crowd closing in and the loud yelling and threats towards us, I pushed down on the male to ensure my weight was full on his person so he could not attempt to take flight or fight us,” Krickovich wrote in his report, adding that he punched the teen in the head as a “distractionary technique” to get him cuffed.

Rolle’s family has since hired civil rights attorney Benjamin Crump, who said he believes the situation would’ve been handled much differently if Rolle was white.

“That’s why Black leaders in South Florida and all over America are up in arms over this,” said Crump.

Like many in the South Florida community, Rolle’s mother said she wants to see the two deputies booted from the force.

“They are supposed to set example for us, they aren’t supposed to be doing that,” Clintina Rolle later told CBS News. “You know, to see somebody who is supposed to be protecting my child hurt my child, and it’s all I want is justice for him.”