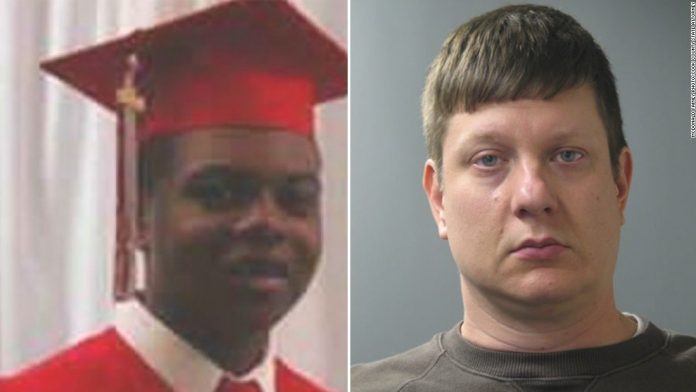 Attorneys prosecuting a white Chicago police officer in the 2014 shooting death of a black teenager asked a judge Thursday to revoke or increase his bail after the officer discussed one of the nation’s most infamous police shootings in a media interview.

Jason Van Dyke’s interview with the Chicago Tribune took place with his attorney standing nearby, and it quickly set off a new legal fight just days before jury selection in the case, which led to days of protests after a video of the shooting was made public and Van Dyke arrested.

When attorney Joel Brodsky saw the interview, he said, he knew one thing for sure: Van Dyke is never going to take the witness stand in the slaying of Laquan McDonald.

“This allows him to basically testify without taking the stand and being under oath, to tell the jurors that he’s not a racist (and) he’s never fired his gun,” Brodsky said. “If he was going to take the stand, why give the interview?”

Prosecutors say the officer’s comments, published Wednesday on the front page of the Tribune, were a clear violation of a judge’s order prohibiting the parties in the case from talking about it publicly. A court hearing was scheduled for Saturday.

For the officer and his legal team, the interview raised the curtain on their strategy to humanize for prospective jurors. Until now, they said, their client has been defined only as the officer seen on dashcam video pumping 16 bullets into the body of a teenager armed with a folded pocketknife.

“During the past four years, there have been thousands of news stories portraying Mr. Van Dyke in an extremely negative light in this case,” attorney Daniel Herbert said in a statement in response to prosecutors. “Not one has included Mr. Van Dyke’s voice.”

It can be a risky move, something Brodsky saw for himself when he represented Drew Peterson, the suburban Chicago police officer who was charged with murder in the death of his third wife. Before he was convicted in 2012, Peterson gave interview after interview to national and local media outlets, often appearing smug and even enjoying the limelight brought on by investigation into the death of Kathleen Savio and the disappearance of his fourth wife, Stacy Peterson.

“His downside was not the things he was saying. It was his personality (and how) everything was a game and a goof to the guy,” Brodsky said. “If I had it to do again, I would have restrained Drew more.”

Asked why defendants might not want to talk, David Erickson, a former state appellate judge who teaches at Chicago Kent School of Law, pointed to an even more famous case: O.J. Simpson.

But to hear some observers tell it, it may have been a risk worth taking for Van Dyke, who has remained silent while media coverage has swirled around him.

“There’s really been no other side to it, so all of a sudden before you know it, what happened has been defined in people’s minds,” said Guy Chipparoni, president of Res Publica Group, a strategic communications firm in Chicago. “You have to find a way to neutralize the landscape.”

“This guy has been convicted by all these grass roots groups saying this stuff about how he was the judge, jury and executioner, so the jury pool is absolutely tainted,” he said. “He had to do something to untaint the jury pool and because the lawyers couldn’t do that, the client did it.”

And by taking that risk, David Erickson, a former state appellate judge who teaches law at the Chicago Kent College of Law, said potential jurors now know exactly what Van Dyke’s lawyers want them to know.

“They know he’s got two kids, a wife,” he said, “and this has been really hard on him and his family.”

Van Dyke was arrested in November 2015, a year after the shooting and on the same day that the video was released. The police department has suspended him without pay.