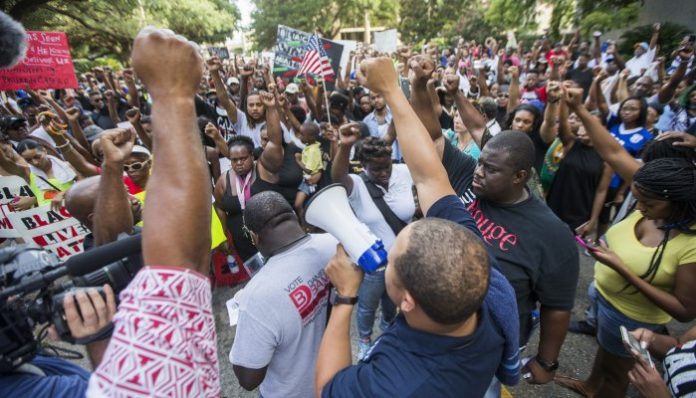 The man reportedly shot in the back and killed by a Chicago police officer Saturday on the city’s South Side was named Tommy, but those who knew the local barber called him “Snoop,” witnesses told Chicago Sun Times reporter Nader Issa.

“He was cool, laid back, very intelligent,” said Gloria Rainge, who had been a regular customer of the barber for five years and watched him get gunned down. Another customer recalled that Snoop would bring his 5-year-old daughter everywhere—fortunately, she wasn’t with her father on Saturday.

Police officers on patrol in the South Shore neighborhood became suspicious of the man because he was “exhibiting characteristics of an armed person,” the Chicago Police Department said, according to USA Today. They observed something that could have been a weapon in his pants. When the cops approached to investigate, he pushed their hands away and fled while reaching for the weapon. Investigators recovered a semiautomatic gun at the scene. He did not have a permit to carry a concealed weapon.

The man’s gun was holstered, but he didn’t try to reach for it while running away from the confrontation. It all started when the officers told him to stop selling loose cigarettes, which he denied doing. He was handing a few cigarettes to his aunt. He ran away after the argument started with the cops. A female officer shot him in the back.

Protesters gathered at the scene shortly after the shooting. Demonstrators threw rocks and bottles at officers, who responded by scuffling with the protesters, the newspaper said.

“Who do you serve? Who do you protect?” many in the crowd chanted.

“We ain’t trying to hurt nobody. We just trying to live decent,” a protester told Issa.

The police arrested four demonstrators late Saturday, and up to four officers were injured, the police said.

Meanwhile, the city’s Civilian Office of Police Accountability is investigating the shooting, and officials placed the officer who killed the man on desk duty.