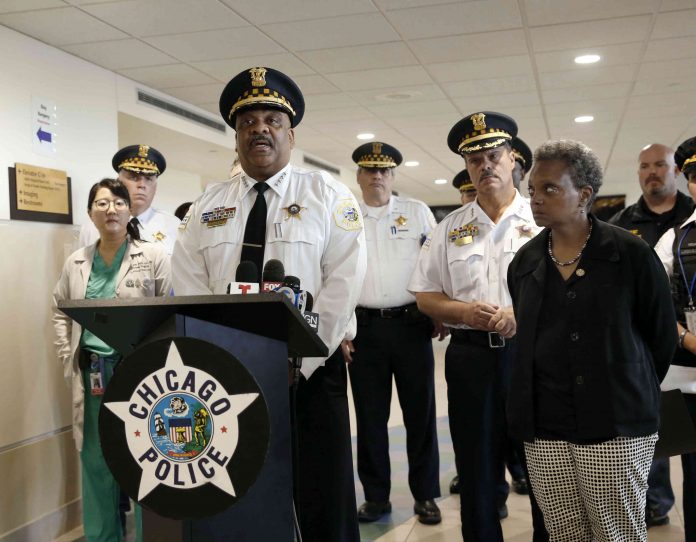 Chicago Police Superintendent Eddie Johnson has been obsessed with Jussie Smollett for months. However, now Johnson is in his own scandal. He was randomly found asleep in his car after drinking, wasn’t tested for alcohol and allowed to drive home.

The Chicago Tribune reports Johnson told Mayor Lori Lightfoot that he “a couple of drinks,” got sick on Wednesday evening and fell asleep in his car. Johnson is blaming the incident on a long day of work and his blood pressure medication. He said at the monthly Chicago Police Board meeting, “How can I explain it? It’s just your body kind of gives you a warning with the high blood pressure thing that you may pass out, so I pulled over, stopped and I just rested myself until that feeling passed.”

However, he was driving home at 12:30 a.m. after dinner and it’s not clear if he had such a long day then why was he having such a late night dinner. Someone called 911 and when officers arrived, he was never tested for alcohol and was even allowed to drive home. Johnson defended the officers by saying, “Someone asleep in a car doesn’t mean they’re impaired.”

That said, Johnson is calling for an investigation on himself by the department’s Bureau of Internal Affairs.

Eddie Johnson got national attention when he appeared on countless television shows to talk about Jussie Smollett being accused of staging his own hate crime. In case you missed it, Johnson and the Chicago Police Department dropped the ball from the beginning of the Smollett case. Originally, a police spokesperson said there was no footage of the assailants. Then, hours later, there were two “persons of interest” on video. They also claimed the “Empire” actor “refused” to give the cops his phone, but he did give his phone records. The FBI reportedly said the Chicago police “overstated” their Smollett case. There is also how the police blindly believed the Nigerian-American brothers, Ola and Abel Osundairo, with what appears to be no corroborating evidence.

Police Superintendent Eddie Johnson said Jussie paid the brothers $3,500 to stage the attack. However, according to the lawyers for brothers, the $3,500 check was for training. The check was written to Abel on January 23, 2019, six days before the “attack.” The memo line reads, “5 week Nutrition/Workout program Don’t Go.’” “Don’t Go” is a song for a music video where he would appear shirtless.

All 16 felony counts for filing a false police report were dropped against Smollett. Nonetheless, even after the justice system did its job and charges were dropped, the city’s Department of Law sent Smollett a bill for $130,106.15. Smollett is now being sued by Chicago for the money.

On Jan. 29, while walking to a subway, Smollett claimed two men yelled racial and homophobic slurs at him, investigators told The Hollywood Reporter. They allegedly punched and poured bleach on him while one of the suspects put a rope around his neck. As they fled the scene, Smollett told police they said, “This is MAGA country.”

Smollett has always maintained his innocence.