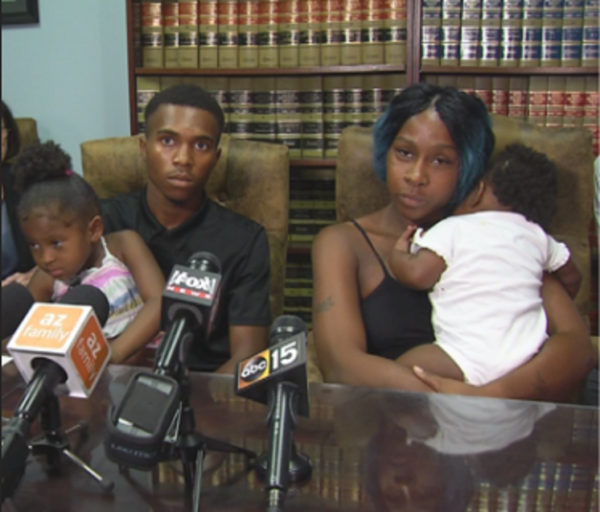 A Phoenix cop is among a pair of officers fired by the department this week over two separate incidents that made national headlines.

On Tuesday, city Police Chief Jeri Williams announced that Officer Chris Meyer and Det. Dave Swick had been relived of their duties, the Associated Press reported.

“I expect more. You deserve more,” Williams said at a news conference. “Unlike other professions, we don’t have a luxury of a do-over.”

Meyer faced scrutiny for his conduct during a May incident involving Black couple Iesha Harper and her fiancé Dravon Ames. A bystander captured the moment Meyer drew his gun and screamed obscenities at Harper, who was pregnant at the time and carrying her two young daughters in her arms.

Meanwhile, another officer was seen assaulting a compliant Ames as he was placed under arrest.

The chaotic scene unfolded as officers responded to reports of a shoplifting. The couple, who were just leaving a Family Dollar store, said they were unaware their 4-year-old daughter had taken a doll they didn’t pay for.

Recalling the incident, Harper said the officer warned, “I could have shot you in front of your f—–g kids.”

“After this, me and my daughters will never be the same anymore or feel the same for police because it seems like every police is out for blood or something,” she told local media at the time.

No one was charged in the case.

A department disciplinary board recommended a six-week suspension for  Meyer, but Williams said she felt the punishment didn’t go far enough.

“In this case, a 240-hour suspension is just not sufficient to reverse the adverse effects of his actions on our department and our community,” she explained.

Meanwhile, Swick was booted over incendiary social media posts about Black people and Muslims, according to AP. One was a meme suggesting speeding drivers should mow down police brutality demonstrators in Ferguson, Missouri.

Officers across several police departments were suspended after a database called The Plain View Project exposed their racist, bigoted and pro-police brutality online postings. The watchdog group made waves after a partnership between nonprofit newsroom Injustice Watch and BuzzFeed News utilized the database to reveal patterns of racism across America’s police departments.

Officers with Phoenix police, as well as others in Philadelphia, Dallas and St. Louis, were among those exposed.

“As a resident or a person in the community, you can express yourself as a part of your First Amendment right,” Williams said. “But as a public servant, we wear this badge as a symbol of our commitment to a higher standard.”

The Phoenix Law Enforcement Association, a police union, has criticized the firings, calling them unwarranted.