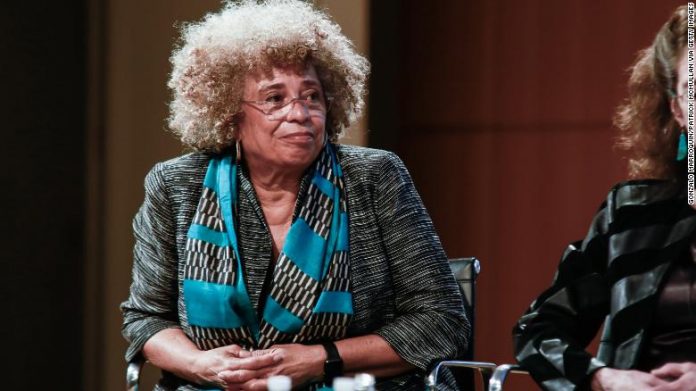 A civil rights institute in Alabama has withdrawn an award for Angela Davis, a longtime radical political activist, author and academic.The Birmingham Civil Rights Institute’s board of directors had chosen Davis to receive its “Fred Shuttlesworth Human Rights Award” at its annual gala next month.But the institute decided to withdraw the award and cancel the annual gala at which Davis, a Birmingham native, would have been honored.The decision came after “supporters and other concerned individuals and organizations, both inside and outside of our local community, began to make requests that we reconsider our decision,” the institute’s board said in a statement.“Upon closer examination of Ms. Davis’ statements and public record, we concluded that she unfortunately does not meet all of the criteria on which the award is based,” the statement said.The board said it recognizes Davis’s “stature as a scholar and prominent figure in civil rights history” but believes its decision “is consistent with the details of the award’s namesake, Rev. Shuttlesworth.” The board apologized to “our supporters, the community and Ms. Davis for the confusion we have caused.”

It is unclear why the group made the decision. CNN has contacted officials at the institute for more clarity on what the concerns were and why they made the move. Davis could not be reached for comment.The Birmingham mayor, Randall Woodfin, noted in a statement his “overriding feeling is one of dismay” after the board chose to revoke the “honor after protests from our local Jewish community and some of its allies.” CNN has also contacted the Birmingham Jewish Federation for a reaction.Davis had been a member of the Communist Party and the Black Panther Party. She has been sharply critical of Israeli policies toward Palestinians and backs the Boycott, Divestment and Sanctions movement.One Jewish outlet, Southern Jewish Life, posted a story about the upcoming award in December, saying, “For some in the community, there might be some indigestion at the dinner over this year’s honoree.””Something not included in the Institute’s publicity for the event is that Davis has also been an outspoken voice in the boycott-Israel movement, and advocates extensively on college campuses for the isolation of the Jewish state, saying Israel engages in ethnic cleansing and is connected to police violence against African-Americans in the United States,” the story said.

Mayor Woodfin says he regretted the move by the institute because it failed “to create an opportunity for necessary consensus dialogue.””I am dismayed because this controversy might have been avoided entirely, had it been handled differently. I am dismayed because, as has been the case throughout Birmingham’s history, people of good will behaved reflexively, rather than engaging in meaningful discourse over their differences and seeking common ground,” Woodfin said in a statement.”Throughout my life, I have been a person who tries to see and understand all reasonable points of view on any given issue. As mayor, I believe that quality is an essential part of my job, a means of encouraging interchange and forging the consensus necessary to arrive at fair and workable solutions to any issue or opportunity that confronts us as a city.”CNN has not heard back yet from the Birmingham Civil Rights Institute or the Birmingham Jewish Federation.