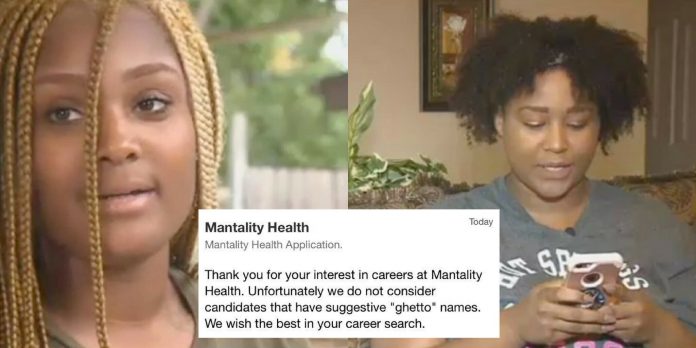 At least three Black women say they received rejection letters from a St. Louis-area chain of testosterone clinics telling them their “suggestive” and “ghetto” names made them unfit for employment. The clinic owner insists the company was hacked, however.

According to the Riverfront Times, the rejections were sent in writing from the Mantality Health office in Chesterville on Monday. Hermeisha Robinson, who applied for a customer service position at the clinic, posted a screenshot of the shocking message on Facebook, where it garnered thousands of reactions.

“Thank you for your interest in careers at Mantality Health,” it began. “Unfortunately we do not consider candidates that have suggestive ‘ghetto’ names … We wish the best in your career search.”

In her post, Robinson said the response left her feeling demeaned and even made her question her own name.

“They discriminated against me because of my name,” Robinson wrote. “My feelings are very hurt and they even got me second guessing my name trying to figure out if my name is really that ‘ghetto’.”

“I know I’m well qualified for the position, as they seen on my resume!” she added.

“The company looked at my name and said we don’t care about what you’ve done in life, your name is going is going to dismiss you completely,” Zachery told local station KMOV4.

A spokesman for the clinic insisted their Indeed, a job posting site, account was hacked by a disgruntled former employee who targeted applicants of color. Mantality Health CEO Kevin Meuret told the station they believe at least 20 people received emails similar to Robinson’s and Zachery’s.

Speaking to The Riverfront Times, Meuret said he also believes the alleged hacker targeted Kimler, using her name and contact information to send the discriminatory messages.

“For some reason it was a personal attack on her,” he said. “I’m deeply upset that her name was tied to something that disgusting. Anyone associated with her knows that doesn’t match with anything she’s said.”

So far, Indeed.com says it has no evidence the company’s account was hacked, however.

” … Account security is of utmost importance to Indeed and something that we diligently monitor,” the company said in a statement. “Account holders are responsible for use of their password and we recommend frequent updates and complete confidentiality of your password. Our investigation into this particular account shows no evidence of compromise.”

Chesterfield Police are actively investigating the situation, and are working to identify the IP address of whoever managed to breach the clinic’s online account.

“Regardless of the situation, that young lady shouldn’t have to open anything that offensive,” Meuret said of Robinson. “But there was no one from our organization that sent that out.”