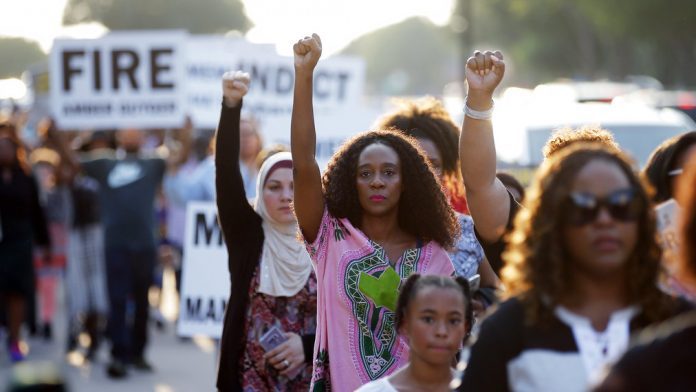 A Dallas community is restless and continues to protest over the shooting death of O’Shae Terry as he drove off during the middle of a traffic stop. A grand jury is set to consider the case in the coming months, but Terry’s attorney and his family don’t think he’ll get a fair review by the Tarrant County District Attorney Sharen Wilson, the Dallas News reports.

“She doesn’t indict cops,” civil rights attorney Lee Merritt said of Wilson. “It’s a very slim chance that it will be indicted, although it’s clearly criminal.”

Terry was stopped for having an expired registration, WFAA reported. Arlington Police Officer Bau Tran reportedly asked Terry to turn off his engine. He did at first, but according to reports, minutes later he began to roll up his window on the passenger side where an officer was standing and pulled off.

Body camera video showed officer Tran sticking his hand in the window and ordering Terry to stop. When he pulled off in his SUV, the officer pulled out his gun and began firing and fatally shooting Terry.

Drugs and a .40-caliber handgun were reportedly recovered from Terry’s vehicle.

“When officers do something wrong and unjust, it’s only right that they be prosecuted the same way we’d be prosecuted,” Woods said.

“Every day, all night long, I keep seeing my son’s face,” Woods said. “The police officer took away my son’s life before he could experience getting a wife or becoming a father and having a family.”

Residents say they have little faith that justice will be served.

Officials are also grappling with the outrage over the fatal police shooting of Botham Jean who was gunned down in his own home last month. Amber Guyger was charged with manslaughter and fired from the Dallas police department.

“It appears the outcome has been predetermined despite the officer’s highly questionable tactics,” said Alisa Simmons, president of the Arlington NAACP.