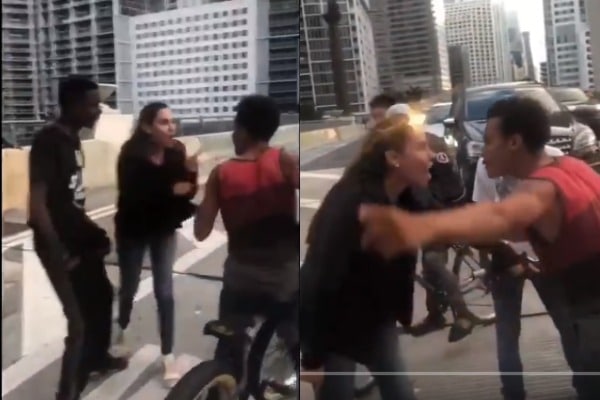 A South Florida woman has been sacked from her real estate job after she was seen on video berating a group of Black teens in a racially charged confrontation over the Martin Luther King Jr. holiday.

On Tuesday, Insignia International Properties announced it had parted ways with the six-year employee.

“Insignia International Properties does not tolerate discrimination,” the company posted on its Facebook page. “Dana Scalione is no longer affiliated with this organization.”

She had been with the company since 2013, according to a separate post.

Scalione’s firing comes after viral video of her yelling and cursing the teenagers, who were blocking her car from passing Brickell Avenue as they participated in an annual MLK Jr. Day event. The teens, who are members of local activist group Dream Defenders, were there protesting the redevelopment of an affordable housing complex when the squabble unfolded.

In the video, Scalione is heard accusing one of the boys of running over her foot with his bicycle, and a shouting match ensues.

“Don’t you touch me, you bunch of thugs,” she yells as she storms away from the group. The teens shout obscenities back at her.

That’s when Scalione’s boyfriend, 51-year-old Mark Bartlett, runs over to confront the teens — with a pistol in hand. He starts hurling racial slurs and obscenities at the group, demanding that they leave the area.

“Get out of here you piece of s–t,” Bartlett shouts at one of the teens, before twice using the n-word. “Get the f–k outta here … f–king stupid n—–s! F–king dumb ass n—–s.”