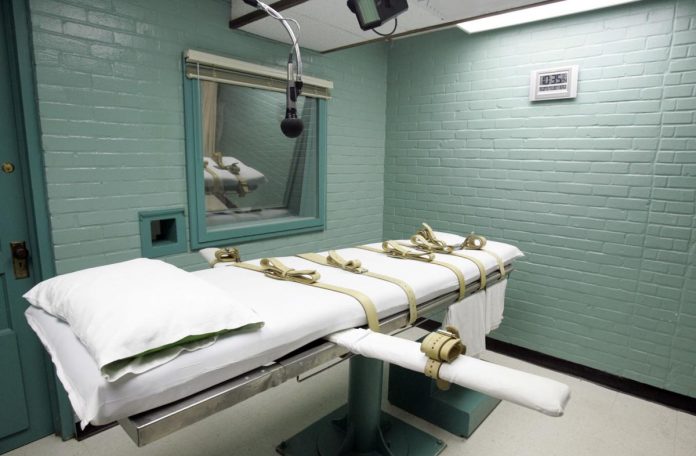 Three states resumed executions of death row inmates in 2018 after long breaks, but nationwide, executions remained near historic lows this year, according to an annual report on the death penalty released Friday.

The report by the District of Columbia-based Death Penalty Information Center says 25 executions were carried out in 2018, the fourth consecutive year in which there have been fewer than 30 executions nationwide.

Executions in 2018 were clustered in eight states: Alabama, Florida, Georgia, Nebraska, Ohio, South Dakota, Tennessee and Texas. About half of all the executions in 2018 took place in Texas, which carried out 13 death sentences. Tennessee was second with three. Alabama, Florida and Georgia each had two while Nebraska, Ohio and South Dakota each carried out one.

Florida’s execution Thursday of Jose Antonio Jimenez for fatally beating and stabbing a woman during a burglary was the most recent. According to a list maintained by the Death Penalty Information Center , there are no other executions scheduled this year.

Nebraska, Tennessee and South Dakota were the three states that resumed executions this year. Nebraska’s execution of Carey Dean Moore was the state’s first execution in more than 20 years. It was also the first time any state has used the drug fentanyl in an execution. This year marked the first time in nearly nine years that Tennessee carried out an execution. South Dakota ended a six-year stretch without executions when it executed Rodney Berget, who was convicted of killing a corrections officer during a prison escape attempt.

Tennessee’s executions came at the end of a systematic challenge to lethal injection there while executions in Nebraska and South Dakota involved inmates who gave up challenges to their execution, said Death Penalty Information Center executive director Robert Dunham. The center doesn’t take a side in the debate over the death penalty, Dunham said, but has criticized the way states carry out the death penalty, singling out problems with bias and secrecy, among others.

All the inmates executed in 2018 were men, and all but two of the executions were carried out by lethal injection, according to a center database .

Two Tennessee inmates, David Miller and Edmund Zagorski, chose to die by electric chair because of concerns about pain associated with the state’s lethal injection procedure. Both unsuccessfully argued to courts that Tennessee’s lethal injection procedure, which uses the drug midazolam, results in a prolonged and torturous death. Before this year, the last time a state used the electric chair to execute an inmate was 2013.

And while three states resumed executions this year, Washington became the 20th state to abolish the death penalty in October, when its Supreme Court said capital punishment in the state was “imposed in an arbitrary and racially biased manner.”

The report notes two death row inmates were freed in 2018: California inmate Vicente Benavides and Florida inmate Clemente Aguirre-Jarquin. Benavides, who was on death row for nearly 25 years after being convicted of raping and killing his girlfriend’s 21-month-old daughter, was freed after California’s highest court ruled that false medical testimony was presented at his trial. Aguirre-Jarquin, who spent 14 years behind bars for the murder of his two neighbors, was freed after evidence showed that the daughter of one of the victims confessed to the murders and her blood was at the scene.

Seventeen inmates currently have execution dates set for 2019 , according to center records.