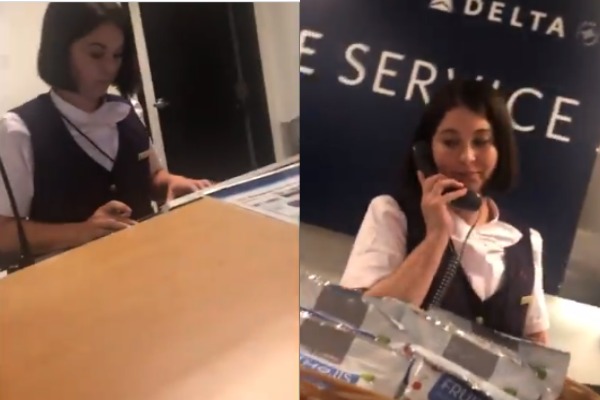 Delta Air Lines is apologizing after an employee dialed police on a Black woman following an argument over damaged luggage.

“We apologize to this customer for her experience in the Boston baggage service office and Delta is in contact with her to better understand what transpired,” a spokesperson for Delta told Yahoo Lifestyle. “We take situations like these seriously and we’re working directly with this customer to use this as an opportunity to learn from her experience and improve on future customer interactions.”

The apology was of little consolation to Arlene (last name withheld), who said she believes the situation was racially motivated.

The drama unfolded Aug. 24 after Arlene had finished traveling on a Massachusetts-bound flight from Kentucky. When she deplaned, the business owner said she noticed her luggage was ripped in several places, so she decided to file a baggage claim at Boston’s Logan Int’l Airport.

“I was told that damage happens to suitcases, which I understand, but I wanted to report it anyway,” Arlene told Yahoo Lifestyle in an interview. “But it didn’t seem like anyone was taking me seriously.”

Things only worsened from there. While waiting for a manager to arrive, Arlene said she noticed a group of Delta employees laughing and snickering in her direction. She was on the phone with a friend at the time and mentioned the employees’ rude behavior. One of them overheard her and said, “No one is talking about you. You’re out of your mind.”

“Can you please stop talking to me?” Arlene said she responded. “You’re not a manager and you’re being disrespectful.”

The crummy customer service continued after a manager arrived. Arlene said she tried to relay the employees’ rude behavior to him, but he simply “dismissed” her before walking off to tend to his other duties once he’d filed her claim. Arlene didn’t happen to catch his name, however, so she asked the aforementioned employee if she could give it to her.

The situation quickly escalated, as Teddra continually declined to give the manager’s name. Arlene caught their tense exchange on video.

“So you can’t give me the manager on duty who you called?” Arlene says in the video, audibly frustrated. “Does he have a business card? … I just need his name for my claim.”

“He’s not going to be able to come back down here,” Teddra tells Arlene, later claiming that it’s against the rules for employees to give names other than their own. “I do not have his name, I can’t give you his name.”

Once Teddra realizes she’s being recorded, she grows angry and picks up the phone.

“Hey Frank, it’s Teddra. Can I have the state police in baggage, please?” she says into the phone. “I have a lady who is in my face recording me and won’t leave the office.”

At that point, Arlene said she just left and went about her business, noting that she passed two security officers heading to the baggage office on her way out.

“I studied criminal justice and sociology and I knew if I met with them, it might have escalated,” she told Yahoo Lifestyle. “I didn’t want to go to jail. It felt like a life-or-death situation.”

After the incident, Arlene said she contacted Delta four times to follow up after the incident but never received a response beyond an initial tweet from the airline that read, “I’m so very sorry to hear that this happened to you. Rude behavior of any kind isn’t tolerated by our employees, no matter who they are. I will definitely forward your feedback over to the appropriate desk for further review.”

The airline later asked Arlene to remove her video of the incident, which she refused.

“I do feel like the situation was racial,” she said. “If a white person calls the police on a black person, it can end badly. If I were white, she may not have called.”