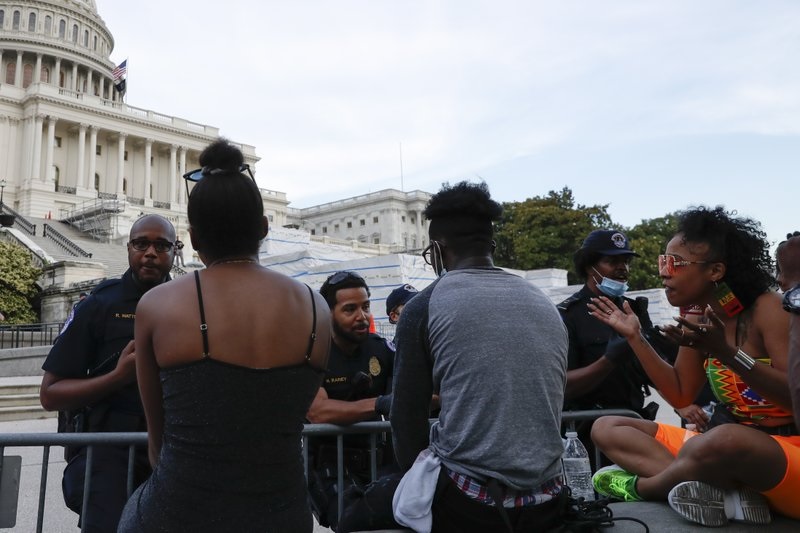 Congressional Democrats, powered by the Congressional Black Caucus, are preparing a sweeping package of police reforms as pressure builds on the federal government to respond to the death of George Floyd and others in law enforcement interactions.

With the urgency of mass protests outside their doors, lawmakers on Capitol Hill are working furiously to draft what could become one of the most ambitious efforts in years to oversee the way law enforcement works. Sens. Cory Booker of New Jersey and Kamala Harris of California, both former presidential candidates, are expected to announce a package in coming days, with a House bill coming soon.

Both the Senate and House efforts are expected to include changes to police accountability laws, such as revising immunity provisions, and creating a database of police use-of-force incidents. Revamped training requirements are planned, too, among them a ban on the use of choke holds. Joe Biden, the presumptive Democratic presidential nominee, has endorsed such a ban.

“We have a moral moment in our country,” Rep. Karen Bass, D-Calif., the chairwoman of the CBC, said on a conference call Wednesday.

The political stakes of any police reform effort are high, amplified in an election year by President Donald Trump’s “law and order” stance, including his threats to call in the U.S. military to clamp down on protesters. With mass unrest now entering a second week, House Speaker Nancy Pelosi sought to shift the national tone Wednesday by walking and talking with protesters outside the Capitol.

The House is expected to vote by month’s end. “We’ll be intense, proactive,” Pelosi said on MSNBC.

With Democrats in the majority, the bills will almost certainly pass the House. But the outcome in the Senate is less certain. Republican Majority Leader Mitch McConnell has said the chamber would take a look at the issues, but he has not endorsed any particular legislation.

Sen. Lindsey Graham, R-S.C., the chairman of the Judiciary Committee, tweeted that his panel will conduct a hearing “to shine a bright light on the problems associated with Mr. Floyd’s death, with the goal of finding a better way forward for our nation.”

But much like efforts to stem gun violence after mass shootings, the political momentum for changes to policing procedures could ebb as the protests and images of those who have died fade from public view. For example, a long-sought federal anti-lynching bill has languished in Congress.

“Words of kindness and grace are essential to America, but they’re not enough right now,” Booker said during a Senate floor speech this week. “It’s on us in this body to do something to change the law.”

“This is just one thing we can do,” said Sen. Kirsten Gillibrand, D-N.Y., who is introducing a bill in the Senate similar to one in the House that seeks to make choke-hold suffocation a federal crime. “This is a moment that demands leadership, it demands a reckoning.”

Sen. Brian Schatz, D-Hawaii, is considering an upcoming defense bill provision that would ban the transfer of military equipment, including armor and tanks, to police and sheriff’s departments.

Lawmakers are looking at proposing other measures. Rep. Frederica Wilson, D-Fla., is proposing a national commission on the status of young black men and boys and Rep. Barbara Lee, D-Calif., has legislation to establish a national truth and reconciliation commission on black Americans.

It’s not clear whether law enforcement will back the changes. Many of the efforts will likely be supported by other minority lawmakers.

Rep. Judy Chu, D-Calif., the chairwoman of the Congressional Asian Pacific Caucus, convened the call Wednesday with the leaders of the Black, Hispanic and Native American caucuses. “We stand together,” she said.

Rep. Brenda Lawrence, D-Mich., is among several members of the black caucus who will be attending memorial or funeral services for Floyd on Thursday in Minnesota and Texas. She acknowledged the opposition the bills will likely face, but called on fellow lawmakers to consider the option of doing nothing.

“It’s very hard to watch that video and go back in your corner,” Lawrence said.