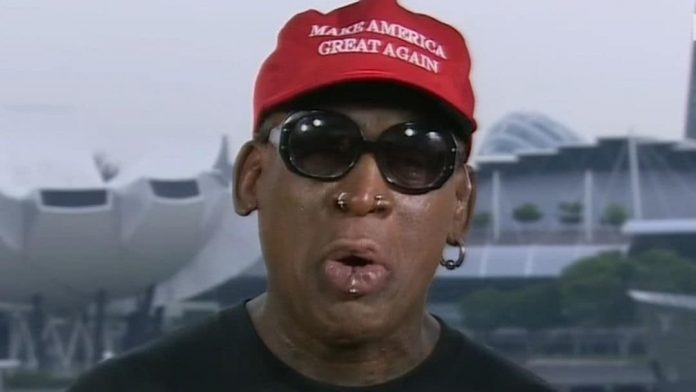 Wherever North Korea is, Dennis Rodman is not far behind. The former basketball star who hasn’t shown his eyeballs in public since the late 1990s popped up in Singapore on Monday for the historic handshake of two egomaniacs: Donald Trump and Kim Jong Un. Naturally, CNN decided to prop up Rodman for television and it was a gargantuan sh*t show.

Carmen Electra‘s ex-husband was on national television in a Make America Great Again hat sobbing while worshipping Kim and Trump. Just like Kanye was big mad that he didn’t get a meeting with Obama, Rodman shed MAGA tears that Obama wouldn’t meet with him over his North Korean BFF.

“Obama didn’t give me the time of day!” Rodman complained. But Trump did. As a matter of fact, according to Rodman, Trump even took the time to thank him — yes, thank him — for doing a “good job.” Rodman  even said he “showed my loyalty and trustworthy to this country” by being present at the historic summit.