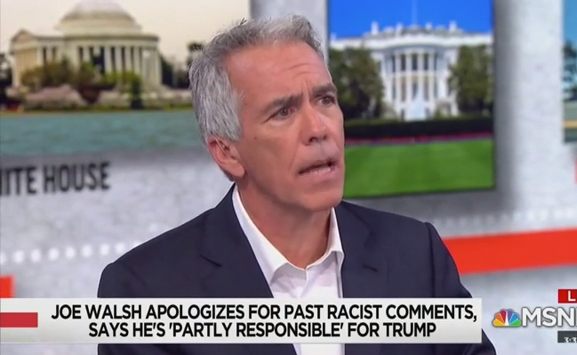 One-time Trump supporter and conservative firebrand Joe Walsh is on an apology tour this week after being pressed on his role in stirring up racial animus, including his previous attacks on then-President Barack Obama.

The former Illinois congressman, who on Sunday announced his intentions of taking on 73-year-old President Donald Trump for the Republican presidential nomination, acknowledged his “ugly,” racist rhetoric during an appearance  on MSNBC, but said he doesn’t believe that makes him a racist.

Host John Heilemann wasn’t convinced, however, and questioned if Walsh had the moral standing to take on someone like Trump, “whose … primary moral failings is his racism.”

“I think you got a lot of work to do on trying to make a distinction between somehow convincing people, I’m not a racist but I said a lot of racist stuff in public,” Heileman argued.

To that, Walsh replied: “Yeah, and I wouldn’t call myself a racist but I would say, John, I’ve said racist things on Twitter, there’s no doubt about it. And an apology is not enough. When I said Barack Obama was a Muslim, that was a horrible thing to say. And I said it because I was so disgusted with Obama’s policy towards Israel, that I went a bad, ugly step.”

“I probably sent out 40,000 tweets in the last six years, no excuse, you and I could sit down [and] find 200 to 300 that you’d say ‘Walsh, what were you thinking?’ ” he continued. “And all I can do is own them and explain them and apologize as sincerely as I can for those that deserve an apology.”

Walsh, a conservative radio host, once had his show pulled from the air after using the n-word on social media. He also often took aim at Obama by claiming the then-POTUS “is a Muslim,” playing both to anti-Islam sentiments and mischaracterizing the nature of the nation’s first Black president’s religion.

“We LOWERED the bar for Obama,” Walsh tweeted in 2017. “He was held to a lower standard cuz he was black.”

In another post from February 2018, the ex-politician ranted that “I have a right to call Obama a Muslim, and call Trump a thin-skinned ego maniac.”

Walsh has been inconsistent in his rebuke of the president and his bigoted behavior and admitted that he likely played a role in Trump’s rise to power. But on Sunday, Walsh called the commander-in-chief “nuts, he’s erratic, he’s cruel, [and] he stokes bigotry.”

Like himself, however, Walsh doesn’t think Trump is a flat-out racist.

“All Trump cares about is himself,” he argued Sunday. “He’ll throw out racist stuff, bigoted stuff. If you help him, that’s all he cares about. I don’t know that Trump’s a racist.”

“You don’t know that — what else do you need to know?” co-host Nicolle Wallace chimed in.

Walsh quickly changed his tune: “He’s a racist, he’s a bigot, he’s a xenophobe, he’s everything, Nicolle, because he will use everything to just simply advance his interests.”