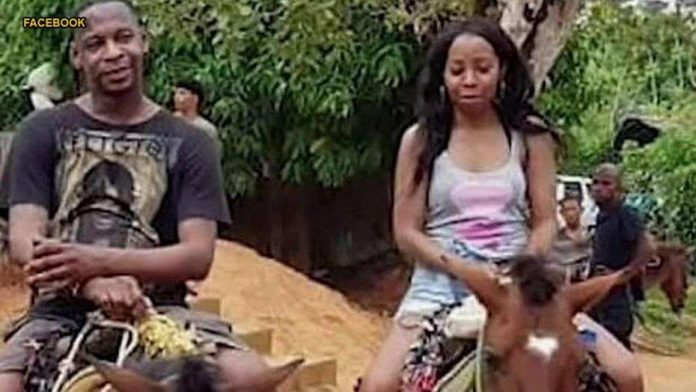 Police have confirmed that the badly injured body of a woman found in the Dominican Republic is indeed one of the U.S. tourists who’ve been missing for two weeks, CNN reported.

Authorities identified Portia Ravenelle using fingerprints, National Police Col. Frank Félix Durán Mejia told the outlet. Ravenelle, 52, and her friend, Orlando Moore, 40, were headed to the airport after a three-day trip to the Caribbean island when their rental car is believed to have veered off-road and into the sea in the early hours of March 27.

Both were presumed dead.

Fishermen reported hearing a loud noise coming from about 12 miles away near the Las Americas, Santo Domingo Este highway earlier that morning, after which a woman’s body was found lying along the road. The woman, later identified as Ravenelle, had severe injuries and wasn’t carrying ID, officials said.

She was taken to a local hospital where she remained in the intensive care until her death on April 4 — eight days following the accident. According to Mañon, no relatives had called the hospital looking for Ravenelle.

Back home in Mount Vernon, N.Y., Moore and Ravenelle’s relatives panicked and contacted police after they hadn’t from their loved ones in several days. Family members later learned that the pair had never made it to their flight home and their rental car was nowhere to be found .

“This is definitely not my brother,” Moore’s sister Lashay Turner told NBC New York last week. “He’s not going to run off on a hiatus and don’t tell his family and his daughter. I’m scared, I don’t know what’s going on.”

Detectives said the fisherman reported seeing a vehicle at the bottom of the sea, however, rough weather conditions have prevented divers from retrieving it.

On March 31, the badly decomposed body of a man believed to be Moore’s washed ashore near Sans Souci, officials said. Authorities are still working to positively ID Moore’s body and are hoping family members can help by reviewing photos of his tattoos, one of which featured the name of Moore’s daughter, “Milan.”

So far, authorities say there is no evidence of foul play and the cause of the early morning accident is still being investigated. A Canadian couple who reported spending time with Moore and Ravenelle during their travels in the resort town of Samana said the pair had a 2 a.m. flight and drove their rental car to the airport.

After checking out of the Grand Bahia Principe Cayacoa hotel, the pair made the 100 mile drive to the airport in Santo Domingo. DR police now believe an accident caused their vehicle to leave the road and plunge into the Caribbean Sea.

Data from the World Health Organization’s Global Status Report last year ranked the Dominican Republic as the fifth-worst in the world for road deaths per capita in 2016, the Westchester Journal News reported. The U.S. State Department has also warned tourists against driving in the Caribbean nation, especially when it’s dark.

“Travel at night on intercity highways and in rural areas can be highly dangerous and is not advised due to animals on the road, poor road conditions and vehicles being driven at either very slow or excessive speeds, often with malfunctioning headlights or taillights,” according to the report.

The Westchester Journal reported that Moore and Ravenelle’s drive “from Samana on the north end of the island to the airport in Santo Domingo on the southern coast was more than 100 miles,” and that the pair traveled on interior roads toward the Las Americas coastal freeway, leading them to the airport.

They would never make it there, however.

The crash remains under investigation and the autopsies on both bodies are underway, officials said.