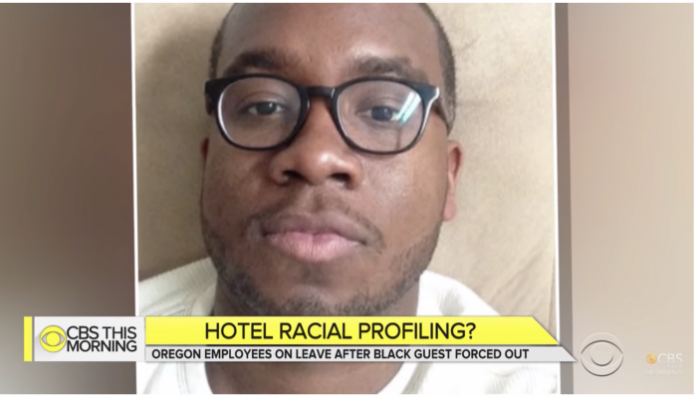 Oh yeah, they screwed up big time in the way they treated Jermaine Massey on Dec. 22, 2018, while staying at the hotel.

Here’s the deal. The Lloyd District hotel is straight up catching hell, as it should, from social media after Massey, 34, a paid guest, filmed himself being removed from the hotel by a security guard and Portland police, reports Willamette Week.

The incident, first reported by Oregon Public Broadcasting, was initially described by the hotel as a “misunderstanding.” His eviction from his room after talking on the phone in the hotel lobby drew national attention over the Christmas holiday.

Massey’s attorneys, Gregory and Jason Kafoury, of Portland-based law firm Kafoury & McDougal, asked the hotel for a full accounting of why hotel security had “approached” him and “interrogated” him.

“Jermaine Massey was, ‘calling his mother while black,’ from a quiet corner of the lobby of the DoubleTree hotel in Portland,” they said in their press release. “Please explain in detail in what manner Mr. Massey was a threat to safety or security.”

As we said up top, the hotel has finally come to its senses and apologized and both employees involved in the incident have been fired.

“It is deeply troubling to hear about Mr. Massey’s experience with discrimination,” he tweeted. “No one should be treated this way, and I hope this serves as a catalyst for necessary changes that address the systemic nature of discrimination of all forms.”

The Portland DoubleTree said it will ask a third party to investigate the incident and review its “internal processes, protocols and trainings to ensure we are creating and maintaining a safe space for everyone.”

Massey accused the guard of “harassing” him, and in a statement provided to CNN by his attorneys, characterized the incident as “calling his mother while black.”

Through his attorneys, Massey has asked the Portland DoubleTree to explain why they considered him a threat to hotel security, and why he was even questioned by security in the first place.