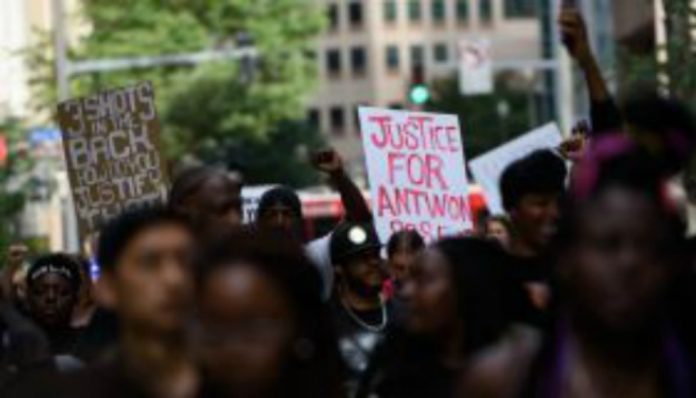 Pittsburgh is still reeling from the death of  17-year-old Antwon Rose, and protesters are being attacked while using their Constitutional right to peacefully protest.

On June 19, Officer Michael H. Rosfeld, who was sworn in hours before the incident, fatally shot the student. During a traffic stop, officers, including Rosfeld, claimed they were investigating a nearby shooting. The driver, Rose and one other person were in the car. The driver was arrested. The other passenger escaped, but was arrested on June 26. Rose allegedly ran as well and was shot in the back three times. As for the nearby shooting to which officers were responding, investigators confirmedRose was not involved in the incident.

Last week, Officer Michael H. Rosfeld was charged with criminal homicide for the shooting of Rose—but we all know that doesn’t mean a conviction.

Protests have continued and the protesters are being attacked.

Back on June 22, 58-year-old Gregory Wagner drove his car through a group of protesters in the city. One person suffered ankle and back injuries and another was hit in the legs, but not seriously hurt. Wagner was charged with  three counts of recklessly endangering another person, as well as other traffic violations. He will have a preliminary hearing on July 11.

Now another person has attacked protesters.

On Sunday, peaceful protesters shut down roads in North Versailles and East Pittsburgh. WPXI.comreports a driver “plowed” through a group of protesters. Five people were hit and one was sent to this hospital, no word on their condition –nonetheless, the march continued. The driver’s name has not been released, but he has been arrested.

This has not scared off the protesters, they said they will continue until there is equal protection under the law.